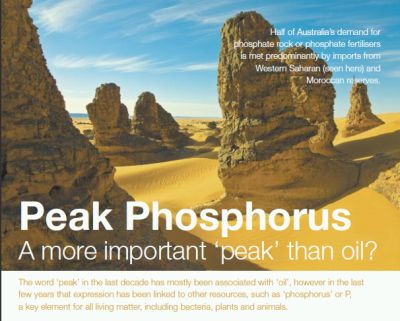 The word ‘peak’ in the last decade has mostly been associated with ‘oil’, however in the last few years that expression has been linked to other resources, such as ‘phosphorus’ or P, a key element for all living matter, including bacteria, plants and animals.

We get our phosphorus from the food we eat, which comes from the phosphate fertilisers we apply to crops. P fertiliser is essential in modern agriculture and is a limiting factor in crop yields. P is a critical global resource alongside water and energy resources and should feature in any discussion about global food security. Despite its significance, it’s a topic which hasn’t had a lot of media attention, perhaps being outflanked by the notion of oil scarcity.

The story of phosphorus is an interesting one. A German alchemist, Hennig Brandt, who was looking to create the fabled Philosopher’s stone, discovered it by accident in the late 17th century. The process he used was through the distillation of some salts, by heating and evaporating urine from beerdrinking German soldiers, eventually producing a white material that glowed in the dark and burned brilliantly. Instead of the gold he was looking to create, Brandt had discovered phosphorus, the first element discovered since antiquity. And an element which is vital for human sustainability.

Historically crop production relied on natural levels of soil phosphorus and the addition of locally available organic matter like manure and human excreta. It was only during the 20th century when the world population exploded that guano and later rock phosphate were discovered as concentrated sources of P and applied extensively to food crops.

The Chinese used human excreta (‘night soil’) as a fertiliser from the very early stages of their civilization. In Europe during the mid-to-late 19th century, the use of local organic matter was replaced by phosphorus material from distant sources which were then seen as unlimited.

Simultaneously the introduction of flush toilets in towns meant that human waste was discharged into water bodies instead of being returned to the soil. But not everyone was happy with this turn of events. Amongst the protesters was Victor Hugo who wrote in Les Miserables in 1862:

Science, after having long groped about, now knows that the most fecundating and the most efficacious of fertilisers is human manure. Thanks to human dung, the earth in China is still as young as in the days of Abraham. Chinese wheat yields a hundredfold of the seed. There is no guano comparable in fertility with the detritus of a capital. A great city is the most mighty of dung-makers. Certain success would attend the experiment of employing the city to manure the plain. If our gold is manure, our manure, on the other hand, is gold.

Most phosphorus available today is extracted from phosphate rock. Around 90% of the phosphate rock extracted globally is for food production with the remainder being used for industrial applications such as detergents.

While predictions of reserves vary, many researchers involved in the study of phosphorus and its relationship to food supply, believe 50 to 100 years is a reasonable assumption. Like oil, most of the economically viable reserves have been discovered, they will eventually peak, after which there will be a steep decline with demand eventually exceeding supply. Also like oil, demand for this commodity has surged due to expanding population growth. Concurrent with the changing diets in developing countries like China and India, the pressures on phosphorus will continue to be exacerbated.

PhD Scholar, Dana Cordell is adamant that we need to rethink the management of phosphorus resources in the global food system and outlines her reasons in her recent article entitled “The Story of Phosphorus: global food security and food for thought”.

She points out that modern agriculture relies on fertilisers derived from inorganic minerals such as phosphate rock, a non-renewable resource that takes 10-15 million years to form, yet a global production peak of phosphate rock is estimated to occur around 2033. While this may seem in the distant future, there are currently no alternatives on the market today that could replace phosphate rock on any significant scale. New infrastructure and institutional arrangements required could take decades to develop.

While all the world’s farmers require access to phosphorus fertilisers, the major phosphate rock reserves are under the control of a small number of countries including China, Morocco and the US. China recently imposed a 135% export tariff on phosphate rock essentially preventing any from leaving the country. Reserves in the U.S. are calculated to be depleted within 30 years. Morocco currently occupies Western Sahara and its massive phosphate rock reserves, contrary to UN resolutions.

Most of the phosphate rock mined in Australia comes from Christmas Island and Mt Isa. Nauru was a major source after World War I, until supplies were largely exhausted in the late 1980s. Australia currently meets around half its demand for phosphorus fertilisers through imports of phosphate rock or phosphate fertilisers predominantly originating from Western Saharan and Moroccan reserves.

While there are potential substitutes for oil, such as wind, biomass or thermal energy, phosphorus has no substitute in food production and as an element, cannot be manufactured or synthesised. In fact the element whose chemical properties are closest to those of phosphorus is arsenic.

Although there is a downward trend for phosphorus demand in developed regions like Western Europe, in the emerging economies such as China and India there is an inclination towards more meat and dairy based diets, which correspondingly require more P in their production. Therefore overall phosphorus demand, and subsequently price, is unlikely to diminish.

Nick Drew, Executive Manager, Fertiliser Industry Federation of Australia agrees that the cost of phosphorus is unlikely to fall to the levels of a couple of years ago, but says that reserves which were previously too expensive to get to market could now be viable. Although he says that this does not overcome the finite nature of phosphate rock reserves in the long term it means that the planning horizon is longer than some are suggesting.

“It’s certainly a genuine issue and definitely something we should be thinking about now. It is a finite resource and at some point we need to discuss seriously how we can use it more efficiently as well as considering its re-use through the food chain, although in the medium term, that is probably unlikely,” he says.

Over-fertilisation of agricultural soils has been a common practice in some developed countries and can contribute to blue green algae. Many factors contribute to blooms but high concentration of phosphate, is considered a major cause. Even in Australia where phosphorus fertiliser rates are low by world standards, inappropriate application practices can result in phosphorus entering waterways.

Nick stresses that more efficient nutrient use is good for both economic and environmental reasons so good nutrient planning based on soil and plant testing is the best way of improving nutrient use efficiency.

“Achieving the long-term global goal of food security means we must change the way we source and use phosphorus in global food production. Despite the African continent being the world’s largest producer of phosphate rock (almost 30% of the global share) it’s the continent with the largest deficit in food security,” says Dana Cordell.

She comments that between 2007-2008 the price of phosphate rock rose 800%, and while the price has come down to some extent, the era of cheap fertiliser is likely to be a thing of the past.

Dana explains that while there is no easy solution to current dependence on phosphate rock for phosphorus fertilisers there are a number of technologies and policy options that exist today at various stages of development.

Around 80% of the phosphorus in phosphate rock mined each year for food production never actually reaches the food on our forks. This means there are significant opportunities for reducing losses in the food chain and increasing the efficiency of phosphorus uptake by crops. There is also an assortment of recovery measures being applied, including ploughing crop residues back into the soil; composting food waste from household, food processing plants and food retailers; and using human and animal excreta. Such sources are renewable and are typically accessible locally.

“Human excreta (urine and faeces) are renewable and readily available sources of phosphorus. Urine is essentially sterile and contains plantavailable nutrients (P,N,K) in the correct ratio. Treatment and reuse is very simple and the World Health Organisation has published “Guidelines for the safe use of wastewater, excreta and greywater” in agriculture.

Capturing urine at the source (at the toilet) seems to have possibilities as a way of recovering phosphorus, as well as reducing potential for toxic algal blooms by keeping it out of waterways. In Sweden for example, two municipalities have mandated that all new toilets must be urinediverting. Sweden has also proposed that 60% of phosphorus in sewage should be returned to land by 2015 (Swedish Environmental Objectives Council, 2007).

“The cost of ecological sanitation systems in the future could be offset by the commercial value of the phosphorus (and nitrogen) they yield, though human excreta alone won’t meet Australia’s future demand for phosphorus. A sustainable solution is likely to involve a combination of measures to increase the efficient use of phosphorus in agriculture and the food chain, in addition to a high recovery rate of phosphorus from various organic ‘wastes,’” says Dana.

Global demand for food will continue to rise, increasing the demand for phosphate fertilisers. In order to avoid a future food-related crisis, phosphorus scarcity (and its potential recovery) needs to be on the agenda with any discussions relating to environmental change and food security.