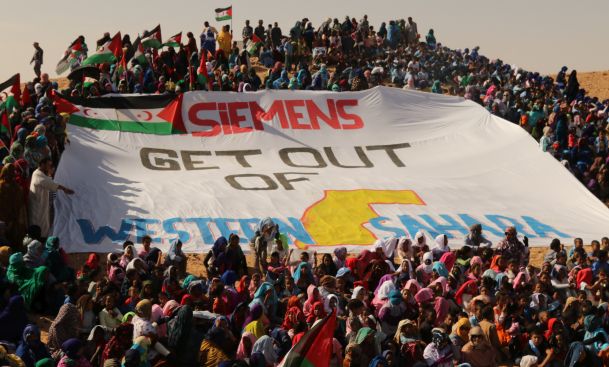 Yesterday, Saharawis gathered to protest Siemens, which is developing the energy infrastructure in Western Sahara for the Moroccan government.

As Morocco invaded Western Sahara in 1975, half the population had to flee. Today, 40 years later, they still live as refugees in neighbouring Algeria.

On the evacuated lands, the German company Siemens is building wind farms for the Moroccan government. The largest farm, Foum El Oued is a 50 Megawatt complex, near the capital city of El Aaiún.

“By investing in such infrastructure on the occupied land, Morocco naturally becomes less inclined to take part in the UN peace process. The involvement of Siemens is deeply concerning, as it contributes to cement the occupation”, Jalihenna Mohamed stated, of the Saharawi Campaign Against the Plunder.

His group is working on denouncing the involvement of foreign firms operating in the occupied territory. Siemens has never responded to whether it has sought the consent of the people of the territory.

For the protest yesterday, which took part in the refugee camp called Auserd, hundreds of people walked from their homes to the gathering place where the protest took place.

Mohamed is worried that Morocco at the COP22 climate talks in November might receive unfounded praise from the international community. He explains that the material which Morocco is already presenting for the COP22 contains false information, as Morocco suggests that its Siemens projects in Western Sahara are located in Morocco. They are not.

“An increasing part of Morocco’s energy projects are not in Morocco, but in Western Sahara. No state in the world recognises Morocco’s groundless claims to our land. We call on all attendees of the COP22 climate talks to be careful when referring to the Moroccan projects – as many of them are not in fact located in Morocco, but rather contributing to the conflict in neighbouring Western Sahara, which is under annexation”, stated Mohamed.

The two companies which operate the Foum El Oued are German Siemens and the Moroccan company Nareva.

Download high resolution versions of the images below, pictures can be used freely.

The CEO of Siemens Energy denounces the occupation of Ukraine, but does not “have the mandate to take a political position on such issues or to confirm a territorial status” in the occupied territory of Western Sahara where the company operates for the Moroccan government.