In a report filed by Kosmos Energy to the U.S. Securities and Exchange Commission (SEC) on 11 August 2011, the Texas company explained that it in July 2011 signed a Petroleum Agreement with ONHYM, “covering the Cap Boujdour area offshore the Kingdom of Morocco.”

The agreement is a new version of an old licence they have held in the waters offshore the occupied territory since the time the company was privately owned.

No information were given in the SEC filing that the Kosmos licence in fact does not lie offshore the Kingdom of Morocco, but offshore the territory of Western Sahara, which Morocco occupied in 1975. The oil company’s plans severely contribute to maintaining the brutal occupation of the territory, and are in violation of international law as described by the UN.

Changes made last week on Kosmos’ webpages show that the block has changed in size. The area is now two-thirds of what it previously was.

The reduction of the licence area had already been anticipated by Kosmos. In May 2011, two months before the new agreement was signed, Kosmos wrote:

“We have not yet made a decision as to whether or not to drill our Moroccan prospects. We have entered a memorandum of understanding with ONHYM to enter a new license covering the highest potential areas of this block under essentially the same terms as the original license. If we decide to continue into the drilling phase of such license, we anticipate that the first well to drill within the Boujdour Offshore Block will be post 2012.”

The reduction of the licence area can be clearly seen from the two maps above. 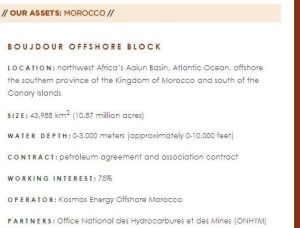 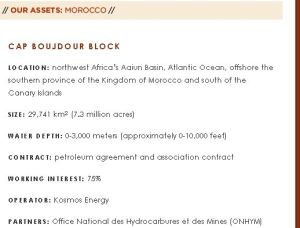 Kosmos last week also added this section to their webpages:
“The Cap Boujdour Offshore Block is located in the Aaiun Basin, one of the remaining frontier exploration provinces offshore West Africa. The basin includes an unexplored Jurassic-to-recent-passive margin with a lower Cretaceous delta similar in size to the present-day Niger Delta. Older wells have demonstrated evidence of a working petroleum system and the presence of good reservoirs. Extensive 2D seismic data has defined significant prospectivity, including many large structural traps. Kosmos has identified and prioritized the block’s major prospective regions. The company acquired additional 2D seismic data over these prospects, followed by the acquisition of a 2,000 km2 3D survey in early 2009. Kosmos is continuing an integrated evaluation of the block”

Kosmos reported also in its SEC filing that they in July 2011 had signed a new block with the Moroccan government. This second block is located offshore Morocco proper.