The Irish company San Leon Energy has published a map on its webpages showing how they carried out oil search on occupied land.
Published 22 February 2012


Since San Leon Energy announced the termination of its “Moroccan” seismic programme 24 January, it has been unclear exactly where those studies were made. The operations were done by a 100% owned subsidiary, under a licence received from the Moroccan government.

A company presentation published on 28 January shows that the seismic study was shot in Western Sahara, a territory partially occupied by Morocco since 1975. The research programme is taking place in violation of the principles underlined by the UN in 2002: no further Moroccan oil search can take place in Western Sahara unless the people of the territory consent to it. They don’t.

Yet, San Leon holds two blocks on the border area between Morocco and Western Sahara. The section of the so-called Tarfaya licence which San Leon has been most interested in, is located in Morocco proper. The new company presentation confirms that the 2011 seismic on Tarfaya has most probably been shot in its pilot area in Southern Morocco. 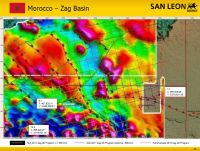 The exact location of the Zag studies, however, is more controversial. The presentation shows how oil search was done on occupied land.

The map to the right (click for higher resolution) shows parts of San Leon's licence in the south and Petrocanada/Suncor to the north. The neighbouring licences are separated by a horizontal white border. To the north, one can see the grids from the 2010 seismic program made by Petrocanada. To the south, one can observe a continuation of the grid system, extending all the way to the southern extension of the San Leon's Zag block.

It is probably not possible to do any more studies in the south-eastern direction of the block, since the licence is likely partially overlapping with the military separation wall that Morocco constructed on the occupied territory in the 1980s.

An image of the San Leon's trucks, owned by the subsidiary Novaseis, was also published (above). The image seems to have been shot in a landscape typical of the Zag block. Their studies on the block were delayed last summer due to the large presence of landmines in the area. 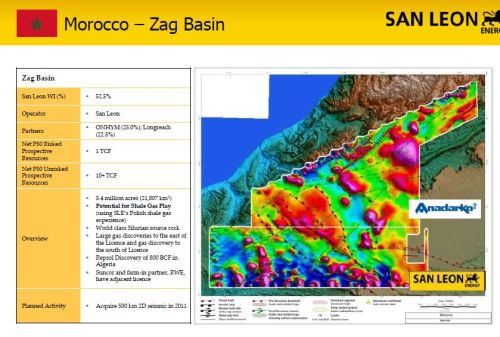 Irish/UK oil company San Leon Energy's work in occupied Western Sahara is delayed, and the company claims to the Moroccan government that it is due to "regional security situation".

Irish oil company San Leon confirms that an unknown Chinese investor is sniffing on a majority stake in the company. San Leon is looking for oil in occupied Western Sahara, in violation of international law.