Support us
The Chinese seemingly work for Total

A subsidiary of China's national oil company seems these days to do seismographic studies on Total's block in occupied Western Sahara. WSRW today protested against the operations.
Published 06 December 2012 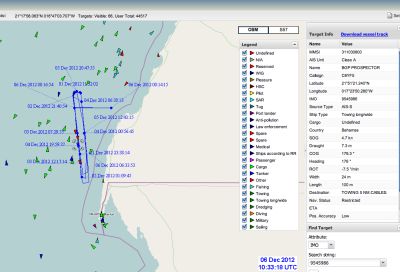 Graphics by: Trygg Mat/Exactearth. Click on images for higher resolution

China's state oil company, CNPC, through its subsidiary BGP, owns a vessel that is now operating in Western Sahara's waters.

The vessel arrived Western Sahara on 26 October. The red track shows its movements from 26 October until now. The blue track represents the vessel's movements the last 6 days. It has during the entire period been operating in the waters west of Dakhla.

It was only few days ago that WSRW discovered Total's massive block in Western Sahara. Yesterday, WSRW wrote that Total had carried out exploration of the waters this summer through the UK company Gardline. The Chinese involvement through BGP could be Total's second exploration programme in the territory this summer/autumn.

The vessel, BGP Prospector, is present on the block that Total has acquired. WSRW has never seen any reference to this programme in media or on the internet. Total's licence was reportedly signed on 6 December 2011, and could be ending today, 12 months later. The question now is whether they intend to renew, stop the programme, or convert the licence into a different kind of agreement. 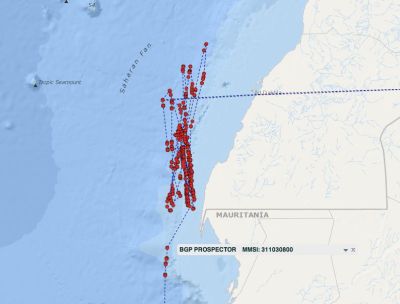 The request below was 6 December 2012 sent to the Chinese companies BGP and CNPC.

We observe that the vessel entered the waters of Western Sahara on October 26th, and is still operating there.

As you probably know, Morocco illegally occupies parts of the territory. The UN Legal Office has stated that further exploration of the natural resources off Western Sahara would be in violation of international law if the people of the territory do not consent and if they do not benefit from them. See the UN 2002 legal opinion on www.arso.org/Olaeng.pdf

It is in WSRW’s opinion that oil exploration activities in Western Sahara in cooperation with the Moroccan state oil company directly contribute to undermine the UN peace process in Western Sahara, and the rights of the people of the territory.

In line with the UN legal opinion, we appeal to BGP’s and CNPC’s own statements of Corporate Social
Responsibility to immediately terminate its activities in Western Sahara.

Furthermore, WSRW would like an answer from BGP, or from your mother company CNPC, on the following questions:

a) Exactly what kind of activity is BGP Prospector currently carrying out offshore Western Sahara?
b) On behalf of which party/parties does BGP undertake the activities?

Looking forward to your response,

Western Sahara Resource Watch has received this photo of the Geo Service I, the offshore supply ship accompanying the vessel BGP Prospector that is carrying out seismic seabed research for French oil giant Total.

Total paid near 4 million to occupier for oil block

With all multinational oil companies in occupied Western Sahara having abandoned their activities, the Moroccan government is trying to catch interest of new investors for further illegal oil exploration. Russian and Chinese state-owned companies, commissioned by a UK firm, are behind a large exploration programme.