Support us
Saharawi fishermen ordered to explain themselves

Dozens of Saharawi fishermen who took part in the protest last Saturday in the harbour of Dakhla have been summoned by the Moroccan police.
Published 29 May 2013


The fishermen's threat to indefinitely intercept the main road to the harbour last week, is said to be the reason why the police has decided to summon them to the police station for further questioning. The Moroccan police has taken the new step in spite of earlier promises not to persecute, but rather discuss to find a solution to their grievances. 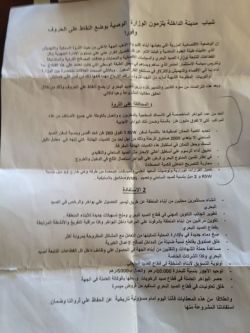 As Western Sahara Resource Watch has previously written, the fishermen associations had on 25 May barred the entrance to Dakhla harbour, in protest of Morocco's irresponsable fish stock management and the socio-economic exclusion of Saharawi people althrough occupied Western Sahara. After the protest, the fishermen announced that if their demands were not taken seriously, they would proceed to cut-off the harbour until further notice.

The picture to the right shows a document outlining the fishermen's demands. Read an English translation of that document here.

The Saharawi fishermen call for adequate protection for the marine resources, want to see more revenues of the fishing sector ending up with the Saharawi people and the removal of corrupt officials from the sector.

"They are trying to scare us, so we would refrain from cutting off the harbour", says one of the fishermen. He went on to say that the subpoenas are part of a wider campaign, in which Saharawi who have defected to Morocco are used to exert pressure on their pro-independence relatives to thwart any further protests.

During Saturday's protest, the fishermen obstructed the transport of sardines to fish meal factories in El Aaiun - sardines which the fishermen claim have not been included in the official catch statistics, as they are the result of overfishing. Amid the protest, a large truck was pulled over, destroying an entire consignment of sardines.

The Saharawi fishermen associations in Dakhla - Nawrass, 'Sailors working onboard Fishing Vessels' and Qindil - regularly stage protests denouncing Morocco's plunder of Western Sahara's waters, which they feel does not benefit the Saharawi people. They are convinced that the fishing sector in Western Sahara brings about millions in revenues for the Moroccan treasury, but it ends up in the hands of a corrupt bunch of regime officials, not the Saharawi people.

Among those who are subpoenaed are Hamid El Koury Ould Elfaida (president of Nawrass), Mamettou Ould Magha (Secretary General of the association 'Sailors working onboard Fishing Vessels' and president of Qindil), Mansour Ould Elfali (vice-president of Qindil), Kabbar Baray (member of Nawras) and many others. Some of them claim to have been threatened by the police.

Demands of Saharawi fishermen in Dakhla, 25 May 2013

On Saturday, Saharawi fishermen blocked the entrance to the harbour of Dakhla for two hours, in protest of abominable working conditions, discriminatory recruiting practices and overfishing.
27 May 2013

Unemployed Saharawis call for an end to discrimination in fisheries industry.