Support us
Kosmos has begun to drill in occupied Western Sahara

On 19 December 2014 , the American oil company Kosmos Energy began to drill for oil in occupied Western Sahara, through an illegal deal with the occupying regime, Morocco. "The company is adding fuel to the fire", stated WSRW.
Published 12 January 2015


Photo above: Atwood Achiever seen here stopping over in Namibia to bunker on its way to occupied Western Sahara. Photo free of use. Click for high resolution.

The American oil company Kosmos Energy has spudded in the territorial waters of occupied Western Sahara on 19 December 2014.

Kosmos' chartered oil rig, the Atwood Achiever, is at present drilling for oil in what is now called the Al Khayr-1 exploration well, previously known as the Gargaa-1 site, located on the Cap Boujdour block in the Aaiun basin. The Block covers 7,3 million acres, with waters depths ranging from 50 metres to 3000 metres. The targeted reservoirs contain a probable average of 1 billion barrels of oil or their equivalent in petroleum.

"Kosmos Energy is playing a dirty and dangerous game. The operation is not taking place in accordance with the wishes of the owners of the oil, thus it is in violation of international law. It will only lead to increased frustration among the Saharawis - both those who live in the occupied territories and those in exile", stated coordinator Sara Eyckmans of Western Sahara Resource Watch.

The Atwood Achiever's drilling is supported by several supply vessels: The USA-flagged C-Empress (IMO: 9203825) and the two Vanuatu-flagged vessels Springbok (IMO: 9683996) and Eland (IMO: 9653757). The two latter are at currently at anchor in Agadir, Morocco proper. Find screenshots of the vessel near the Al Khayr well below.

The drilling of the Al Khayr well is expected to take up to 90 days. Kosmos Energy is aiming to complete the drilling by mid-March - well before the UN Security Council's next scheduled hearing on Western Sahara, at the end of April.

Western Sahara appears on the UN list of Non-Self Governing Territories, lacking an adminstrative power. Morocco invaded Western Sahara in 1975 and subsequently went on to occupy large parts of the territory. Morocco's claims over Western Sahara have been rejected by the International Court of Justice. No State in the world recignises Morocco's self-proclaimed sovereignty over the territory, while the Saharawi people's right to self-determination is backed unanimously. The UN treats Western Sahara as a case of unfinished decolonisation.

The UN Security Council's commissioned Legal Counsel of 2002 prohibits oil drilling in Western Sahara as is at present being undertaken by Kosmos, for failing to take into account the wishes and the interests of the people of Western Sahara; the Saharawi people. The Saharawis have repeatedly protested against Kosmos drill plans in their occupied land. 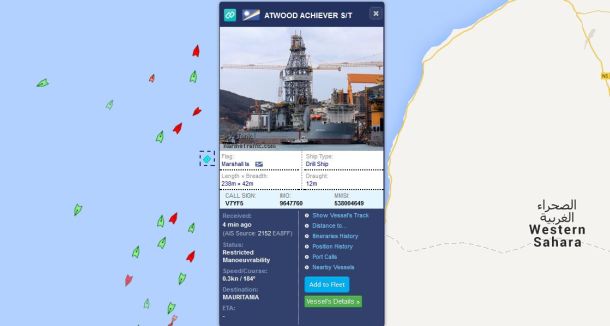 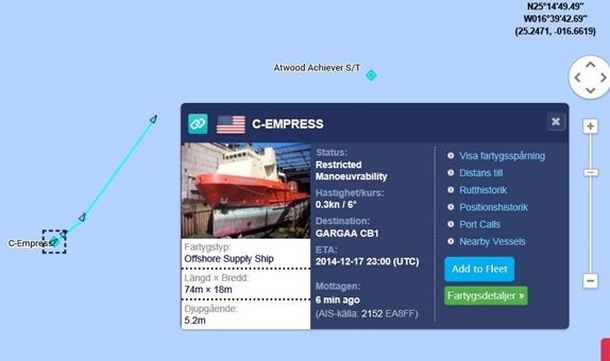 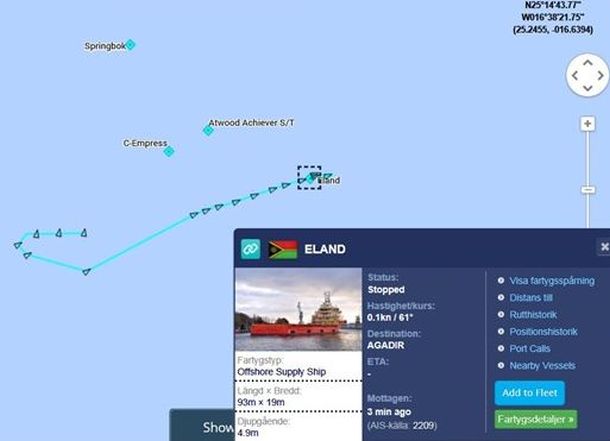 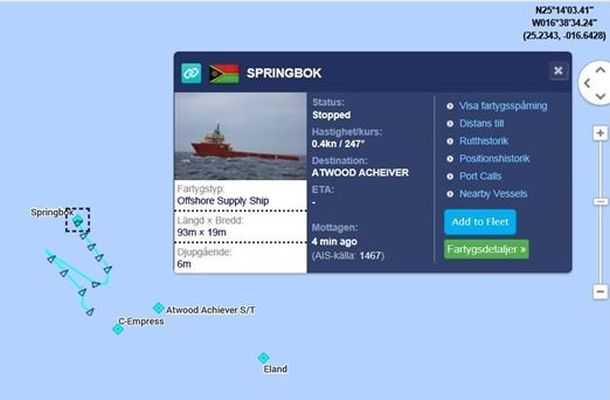 Kosmos Energy today announced that it is expecting the first results from its controversial drilling in occupied Western Sahara sooner than anticipated: in early March.
23 February 2015

The drillship Atwood Achiever - which is to undertake drilling in waters of occupied Western Sahara - is no longer in Las Palmas and has vanished into thin air.
17 December 2014

The drillship 'Atwood Achiever' has today entered the port of Las Palmas, Canary Islands. There it will do its final adjustments before starting the drilling in occupied Western Sahara.
16 December 2014