The Policy Department of the European Parliament has published a report on the need for a coherent EU policy with regard to the three occupations of Western Sahara, Palestine and Crimea. In all three cases, plunder is illegal, the report states.
Published 11 April 2016 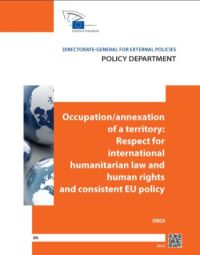 The report looks into the need for a coherent EU approach with regard to the three occupations of Crimea, Palestine and Western Sahara. At present, the EU displays a manifest lack of consistency on the subject. "While each situation has its own characteristics, the international law governing them is the same. For keeping the European Union's credibility, it is crucial, and therefore necessary, to treat like cases alike", the report reads in its introductory paragraphs on p.13.

"While there is no clear EU policy of non-recognition with regard to Western Sahara, such a policy has developed over time regarding the OPT and is quite clear and consequential in the case of Crimea." (p.46)

With regard to the EU's obligations vis-à-vis Western Sahara, the report reads that: "As has been stated above with regard to Palestine, all States are under an obligation not to recognise an illegal situation resulting from annexation. They are also under an obligation not to render aid or assistance in maintaining this illegal situation. It is also for States, while respecting the United Nations Charter and international law, to see to it that any impediment, resulting from the annexation, to the exercise by the people of Western Sahara of its right to self-determination is brought to an end". (p.42)

The report goes into the EU's economic agreements with Morocco that are also being applied outside of Morocco's national territory, namely into Western Sahara. "Any agreement with Morocco regarding the waters and territory properly belonging to Western Sahara should be the subject of an arrangement, in which Morocco acts in its capacity as an occupying power. As additional condition, it should be clear that the agreement would benefit the people of Western Sahara (as defined under international law) and be in accordance with the wishes of the people". (p.44) The EU is not doing so at present, the report states.

The report ends with recommendations for the EU institutions to make the emerging policy of non-recognition more coherent. The policy department has listed several recommendations specifically for the European Parliament, including the following;
- "The European Parliament should refuse to give its assent to treaties and other agreements and measures which violate the obligation of non-recognition and/or which support an ongoing illegal occupation or annexation". (.p54)
- "The European Parliament and its Members should regularly ask the Commission and other responsible EU bodies about information regarding the implementation of agreements with - and projects in occupying states, in order to ensure that no illegal occupation or annexation is recognised or supported." (.P.54)

How the EU should comply with the Court ruling

Yesterday, the EU Court of Justice annulled two EU-Moroccan bilateral agreements. WSRW has the following recommendations to the EU institutions.