Support us
Total officially states it has left Western Sahara

"The contract was not extended in December 2015", company writes on website. It has also confirmed that it has "no plans" to return to the territory, which lies in the part of Western Sahara under Moroccan occupation.
Published 21 June 2016


"Total has informed the Moroccan authorities that it would not request a new extension of its reconnaissance authorisation in the Anzarane block," a source in Total told news service AFP on 21 December 2015. 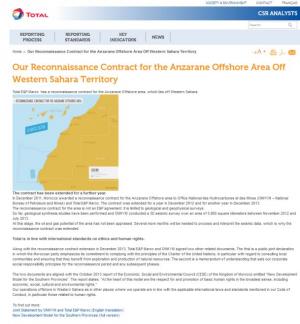 The information about Total's departure from the waters of Western Sahara last year, a territory under Moroccan illegal occupation, had to this date only been known through informal channels. Total now specifically writes on its website that the contract in Western Sahara has not been renewed. The website can be downloaded here.

The image to the right shows how the article appeared on Total's website for a long time into 2016. Click for bigger version.

It is now also clear that Total "has no plans to resume this activity in the future". This was stated to the Norwegian investor KLP, according to a press release from KLP today.

KLP today announced it has reincluded Total in its investment universe after it previously had excluded the French oil company over breach of KLP's ethical guidelines due to its Western Sahara involvement.

“We commend Total for no longer engaging in oil exploration off the coast of Western Sahara. That has been the objective of our dialogue with the company. With respect to non-self-governing territories, it is extremely difficult to justify exploration for and extraction of non-renewable natural resources within the framework of international law,” said Jeanett Bergan, head of responsible investment at KLP Kapitalforvaltning.

It is also worth noting a few new changes to the revised article describing the activity on the Anzarane block in Western Sahara, as appearing on Total's website.

"From an ethical standpoint, Total E&P Maroc and ONHYM signed two documents: a public joint declaration and a memorandum of understanding", the article now reads.

"Total, as an Energy Company, does not deem itself legitimate to have views on political or diplomatic subjects that belong to the United Nations and that are still being debated within the relevant international institutions."
Total to WSRW, 14 May 2013

The terminology of ethics has not been applied by Total before. So far the company has limited itself to what seems to be controversial interpretations of international law.

It is not further explained, however, how Total finds it ethically correct to sign agreements with the Moroccan state oil company ONHYM in relation to the exploration of hydrocarbons for a territory which does not belong to Morocco, but to the people of Western Sahara. There are no mention in the agreements with ONHYM nor in any of the documents by Total that consent has been sought from the people of the territory, which is a prerequisite for its legality, according to the UN. Many observers state that Total, by operating in Western Sahara, contribute to the continuation of the conflict.

Total also underlines that Morocco has been committed to comply with the principles of the UN Charter, something which, ironicaly, Morocco fails to do by its mere illegal presence in the territory. As late as in 2016, UN officials underlined that Morocco by expelling UN troops from Western Sahara were violating the UN charter. There are no paragraphs in the UN Charter that can explain Morocco's occupation of Western Sahara. Morocco works against the fulfilment of UN Charter Article 73, which is the right to self-determination that the Saharawis are calling for.

Total also claims that it "Total was in line with international standards on ethics and human rights". They do not specify on the website what standards they are referring to. Numerous investors have found their practice not to be in line with ethics. Total also make no reference to the right to self-determination of the people of Western Sahara in any of its reports. Self-determination is established as Article 1 in the UN conventions.

PS: Other parts of Total's website still claim that it has interest in Anzarane - and even that Anzarane lies in "Morocco", which is not the case. No state in the world, nor the UN, recognise Morocco's presence in Western Sahara. The screenshots below were retrieved on 21 June 2016. 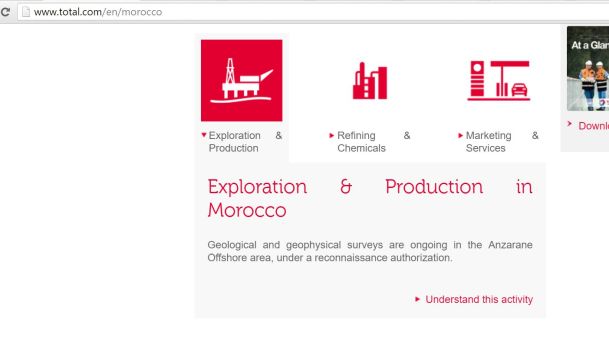 Total paid near 4 million to occupier for oil block

The Norwegian insurance company Storebrand has blacklisted both phosphate and oil companies involved in occupied Western Sahara. Among them are the French company Total, which are now back in from the cold after they withdrew from the territory.
25 March 2016

The French multinational oil company has announced that it is no longer pursuing oil search offshore Western Sahara. "More good news for the Saharawi people. We urge the remaining oil companies to follow suit", stated WSRW.

The French oil multinational confirms having renewed for 12 months its licence offshore "the Sahara region". The company keeps following the terminology of the occupying power of Morocco - their partner.
03 February 2014