For the second year in a row, the Moroccan government has spent most of the EU's fish sector support on the development of the fishing industry in occupied Western Sahara. And the EU was fully aware of it.
Published 23 November 2016


Under the EU-Morocco Fisheries Partnership Agreement, entered into force in July 2014, Morocco receives an annual €14 million earmarked to develop its fishing sector. Morocco is expected to annually report back to the European Commission on the geographical distribution of that sectoral support. And for a second year in a row, most of the money is spent outside of Morocco, and inside the part of Western Sahara that it holds under military occupation since 1975. 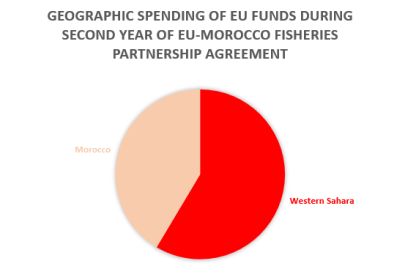 By its own admission, Morocco has spent at least 58.6% of the sectoral support – or €8.2 million - in Western Sahara during the second year of the FPA. The report itself does not contain the notion ‘Western Sahara’ however, as that concept is taboo in Morocco. Rather, on page 15, there is a table listing spending across the 12 administrative regions. Two of those regions are entirely in Western Sahara; ‘Laayoune-Saguia El Hamra’ and ‘Dakhla-Oued Eddahab’, receiving €1.92 million (13.7%) and €6.28 million (44.9%) respectively. The administrative region ‘Guelmim-Oued Noun’ overlaps the Western Sahara border, but to the eastern part, and thus probably not accommodating any fishing related activities.

Earlier this year, WSRW extensively covered Morocco’s first expenditure report – covering its geographical expenditure of sectoral support during the first operative year of the FPA. Out of the 25 projects funded by the EU under the first operative year of the fish agreement, 10 were located in Western Sahara. In addition, 10 other projects were carried out in part in Western Sahara. 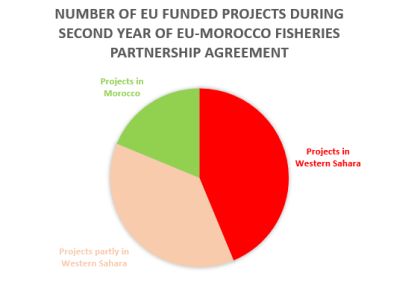 For the second year, Morocco applied for EU funding for 32 fisheries projects; 14 of those are located in Western Sahara, and 12 are carried out in part in Western Sahara. A list of all EU-funded projects that are fully or partly in occupied Western Sahara is included below.

The European Commission is fully aware that it is funding these projects that are located in occupied land. As stipulated in the Protocol to the FPA, the Moroccan government must first present the projects it would consider eligible for EU sectoral support; the EU Commission then needs to expressly agree to fund these projects in arrears. Once granted EU approval, Morocco can proceed with the implementation of the projects, and the EU reimburses one year down the line, in accordance with made progress.

In its second expenditure report, Morocco has also announced projects that it will kick off next year. These include the purchase of a training fish vessel (longliner) to be deployed in El Aaiun, Western Sahara. Morocco will also deprogram a construction project in Tibouda (Morocco proper) in order to finance work on three fishermen towns in the Dakhla-Oued Eddahab administrative region, which is located entirely in occupied Western Sahara (See project 14 in the list included below for further info).

1-10 are projects initiated during the first year of the fish deal, 12-14 are new. Project 11 was in last year’s report, but described as an observation system that could be applied in all the waters under Morocco’s control. Today it is clear that it is in fact located in Western Sahara. For more info on projects 1-10, see here.

1. Construction of a ‘new generation’ freezing hall in Dakhla

2. Supplying solar energy to the landing point at Aftiessat

3. Supplying solar energy to the landing point in Lamhiriz

4. Construction of fishermen cabins in the port of Boujdour

5. Creation of a landing point for aquaculture in the bay of Cintra

7. Construction of an experimental aquaculture farm in Dakhla

8. Construction of CAPI in Dakhla (space where pelagic fish is sold to the processing industry)

9. Construction of CAPI in El Aaiun

10. Upgrade the fish hall of Lamhiriz

11. Operational oceanographic observation system to observe marine environment
The title sounds like this is a generic project, but it turns out to be site-specific. Last year, as there were no concrete site locations included in Morocco’s first annual expenditure report, WSRW considered this to be carried out in part in Western Sahara. This year’s report clarifies that the observation system consists of a single 6 meter high buoy, weighing around 2.5 tonnes with a deadweight concrete block of 7.5 tonnes to keep it in position. The device was supposed to be installed in the Dakhla area, Western Sahara, early October (23°30°N). The buoy was manufactured in Casablanca, at a total price tag of 12 million Moroccan Dirham (MD). Morocco asks for MD 5.85 million (€540.000) to be paid for work done on this project during the second year of the fish agreement.

12. Strengthen landing checks in Dakhla
The project consists of purchasing weighing and surveillance equipment to be employed in the port of Dakhla. The project would cost MD 40 million, to be financed completely by EU sectoral support. Note that under the FPA, EU vessels have a landing obligation; they need to leave certain percentages of their locally fished catches (amount depending on the species) in the nearby ports. These catches can then be sold to the local fish processing industry. Morocco asks for MD 7.50 million, or €700.000, to be paid for work carried out during the second operative year of the FPA.

13. Upgrade the Dakhla industrial zone
This progamme consists of six projects chosen by the Moroccan government that grant private operators fishing opportunities in return for constructing processing units in a newly developed industrial zone, located at the port’s entry road. The works are reported to cost MD 431 million. The EU would cough up MD 30 million. MD 2.7 million (€250.000) is asked for work done during the second operative year of the fish deal.

14. Construction of housing for fishermen at three fishermen towns
The chosen fishermen towns are Labouirda (140km south of Dakhla), Ain Beida (60 km south of Dakhla) and N’tireft (60 km north of Dakhla). Labouirda will be equipped with housing, petrol storage space and shops. Ain Beida will be endowed with petrol storage and shops, while N’tireft gets housing and shops. The original proposal included 2 other fishermen towns (Tarouma and Agti El Ghazi – both also in Western Sahara – which have been swapped for Ain Beida and N’tireft). The change to the project comes at a higher expense than originally anticipated; from MD 35.2 million to MD 57.2 million). The change of plans has delayed implementation, now foreseen for the 2016-2020 timeframe. Morocco now asks the EU to provide MD 0.22 million (€20.000) to reimburse work done in the second year of the FPA.

15. Construction of port walls (four out of fourteen locations are in occupied Western Sahara)
Included in Morocco’s first expenditure report as a project to be carried out in 9 locations (four of them located in Western Sahara), the content has been altered to now include 14 locations. Three of the four locations in Western Sahara have been retained (Dakhla, Boujdour and El Aaiun), while one – Lamhiriz – seems to have been swapped for Ain Beida, south of Dakhla. It is unclear to WSRW whether the prefab wall construction in Lamhiriz has been finished, or whether the idea has been abandoned. The report reads that the entire project has been completed, and all walls have been erected in the cited locations.

16. Offshore exploration campaign (sector 2 and 3 encompass Western Sahara)
Dubbed “offshore prospection campaign” in the previous report, the price tag of this particular project has risen from MD 40 million to MD 60 million – though the content appears unmodified.

17. Washing tunnels for fish preservation (three out of the four locations are in occupied Western Sahara)

18. Construction of storage facilities (three out of the four locations are in Western Sahara)

19. Transport material (three out of the five locations are in occupies Western Sahara)

20. Inventory, evaluation and classification of coastal resources (assumed as partly in Western Sahara, though not specified)

21. Harmonisation of exploitation system (assumed as partly in Western Sahara though not specified)

22. Support for socio-professional associations (assumed as partly in Western Sahara, though not specified)

23. Purchase of 20 all-terrain vehicles for surveillance in the framework against IUU fishing
All vehicles have been purchased. Of the 20, 5 will be deployed in Western Sahara. One vehicle is assigned to each port listed, with the exception of Dakhla, which will be equipped with three vehicles.

24. Prospection of rocky sea-floors
The lack of knowledge about species living in these particular areas, triggers the Moroccan government to undertake this project, which consist of renting a longliner, obtaining necessary scientific equipment and undertake inspection campaigns. Presumably this project will also be carried out in Western Sahara, as the targeted fish categories include stocks present in the territory’s waters. The project will cost MD 8 million. Morocco asks MD 2.16 million (€200.000) to be installed for the FPA’s third operative year.

25. Upgrade of health posts in ports
This project consists of upgrading 18 health posts, where fishermen will be tested to see whether they are fit for the job and where they can receive first-aid care. The locations are not included in the report, but pictures of the health post in Boujdour are included. The entire project will come at an expense of MD 4 million, of which MD 1.80 million (€170.000) will be granted for the third year of the FPA.

26. Development of a network of scientific observers for artisanal fisheries through formations of local fishermen
The project will be carried out in 15 to 20 locations (not yet specified) along the coastline of Morocco and thus probably also Western Sahara. Fishermen will receive a training to monitor species and stocks. The project will cost MD 7 million. Due to lack of progress, and thus not reaching target goals, Morocco asks MD 1.89 million (€170.000) to be freed up for the third year of the FPA.