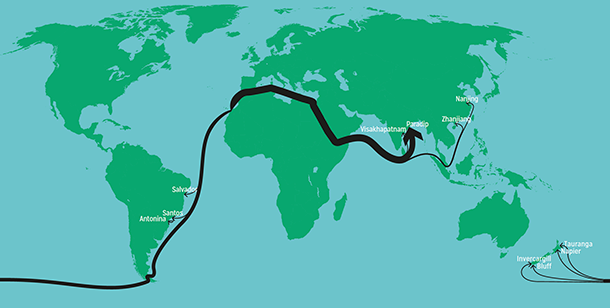 The report demonstrates that 19 vessels exported a total volume of 1.03 million tonnes of phosphate, worth an estimated US $90.4 million, out of the occupied territory in 2019.

That is the lowest recorded amount ever. Compared to the previous calendar year, 2018, the exports have practically halved.

The massive reduction is mainly linked to the pulling out of Nutrien from Canada, which over the last years have imported around 50% of the controversial conflict mineral. Now that Western Sahara’s white gold is no longer exported to North America, only a handful of companies are still linked to the contentious trade.

India’s share of the export is close to 50%, the lion’s share ending up at OCP’s joint-venture in the country, Paradeep.

No less than a third of the year’s exports went to New Zealand, to farmer cooperatives Ravensdown and Ballance Agri-Nutrients which are increasingly facing criticism from Kiwi civil society groups.

The year was also marked by 4 mystery shipments. Two of those were small consignments that went to Brazil. WSRW suspects the small fertilizer producer Fertipar to be the importer, but has not received any replies to its inquiries from the company. The other two shipments went to two different ports in China. It is unclear who the importer is.

The report also sheds light on companies that are involved in the technical aspects of Morocco's operation of Western Sahara's phosphate reserves, including Continental, Siemens, Worley and Epiroc/AtlasCopco, and on the shipping firms that ensure transport of the controversial commodity around the globe.

Since the detention of vessels transporting Western Saharan phosphate in Panama and South Africa in 2017, not a single shipment has taken those routes. That trend continues to this day.

WSRW calls on all companies involved in the trade to immediately halt all purchases of Western Sahara phosphates until a solution to the conflict has been found and the Saharawi people have been assured the exercise of their fundamental right to self-determination. Investors are requested to engage or divest unless companies commit clearly to withdrawing from the trade.

Report: Canadian companies behind nearly all of the dirty trade

Two Canadian companies, Agrium and PotashCorp, were behind two thirds of all imports of phosphates from occupied Western Sahara last year. WSRW today launched its annual report of the controversial trade in Western Sahara's white gold.