Support us
Kosmos could commence drilling next year in occupied Sahara

The US oil company Kosmos Energy has contracted a rig from Atwood Oceanics for drilling next year. There is a large chance that drilling will take place in occupied Western Sahara, for the first time since the UN said it would be illegal.
Published 13 June 2013


Photo above: Saharawi refugees on the Canary Islands protest Kosmos Energy's seismic studies in 2009 done in partnership with the occupying power, Morocco. Here in front of the supply vessel of the seismic study.

Texas based company Kosmos Energy, with licence offshore occupied Western Sahara, announced 10 June 2013 that they have entered into an agreement for a rig with Atwood Oceanics and that the rig will be used "offshore Morocco".

Kosmos holds an oil licence with the Moroccan government offshore Western Sahara, the so-called Boujdour block. The company is obliged to drill to retain its exploration and production rights in the block. 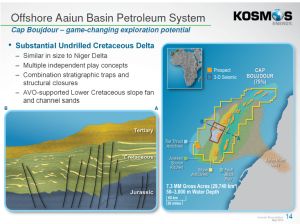 The company holds licences both offshore Morocco and offshore the territory that Morocco occupies. It is not specified in the Kosmos news release exactly where the rig will be used. Chances are large, however, that it will take place in Western Sahara.

The company has explored the block for several years now, and has since 2005 stated that they have planned to drill in the Boujdour block in Western Sahara. The news release from Kosmos states the new rig will be used "to drill the Company’s initial exploration well offshore Morocco." As late as 13 May 2013, did Kosmos state in a company presentation that they had plans to drill the first wells offshore Morocco in fourth quarter of 2013.The statements on drilling make no distinction of the offshore Agadir licences and the Boujdour licence.

If used in Western Sahara, those activities would be in direct violation of the principles of international law described by the UN Legal Counsel in 2002. The drilling in the occupied territory will be the first of such kind since the 2002 UN legal opinion.

"Kosmos Energy's current and planned activities in the occupied territory directly undermine the UN peace process. We call on all owners of the company to urgently put pressure on the management on the company to stop the further plans in occupied Western Sahara in partnership with the occupying power", stated Sara Eyckmans, coordinator of Western Sahara Resource Watch.

The contracted rig, Atwood Achiever, is semi-submersible and currently under construction in South Korea. It is scheduled for completion in June of 2014 and expected to commence drilling operations in the second half of 2014. The owner of the rig, Atwood Oceanics, is registered on NASDAQ.

"The signed agreement covers an initial period of three years at a day rate of approximately $595,000, with an option to extend the contract for an additional three-year term. Within the initial committed period, the Company plans to utilize the rig term on its multi-year, high-impact exploration portfolio, while also allocating a portion of the rig term to one or more E & P operators", the Kosmos statement reads.

Nine years
Kosmos has failed to reply to all requests regarding the operations in the occupied territory. In stead, the company has maintainted its operations for the last nine years.

29 October 2004 a subsidiary of Kosmos Energy, entered into the Kerr-McGee operated Boujdour block, with a 30% share.

As Kerr-McGee, after heavy criticism, left the Boujdour block in 2006, Kosmos’ subsidiary, Kosmos Energy Offshore Morocco HC, signed a petroleum agreement for a territory at about half the size of the former Boujdour block, and, at the same time, took over the full operatorship. The agreement was signed on 3 May 2006 with the state owned Moroccan oil firm ONHYM, on behalf of the Moroccan government. Kosmos has maintained these rights since. The block today covers 29,741 sq.km and carries the same name as the one Kerr-McGee was operator for. The company holds 75% of the ownership over the block, with ONHYM having the remaining 25%.