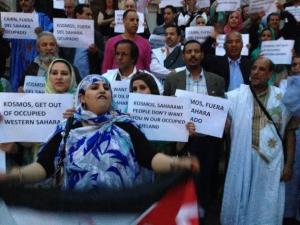 See the movements of the five vessels below.

It seems clear to conclude from those movements that the operation is done on behalf of Kosmos Energy, operator of the Boujdour Block in occupied Western Sahara. Kosmos has already stated it plans to drill later this year, and announced 28 October 2013 it would do further 3D seismic before starting the drilling. This round now discovered is their alerted, final, 3D exploration.

A drilling rig has been scheduled to arrive Western Sahara already in July, with first drilling ever in the occupied territory sto start in October or November. 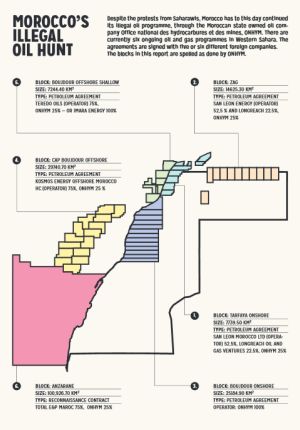 The seismic study discovered now seemingly has purpose of assessing the location and extent of possible oil bearing structures in the seabed to the north and south of the Boujdour block. The location corresponds to the area around the planned "Garaa 1" exploratory well that Kosmos earlier announced.

"Kosmos Energy's operation is severely undermining the UN peace efforts for the occupied territory. The company has done nothing to ascertain whether their operations are in accordance with the wishes of the people of the territory. We condemn and regret Kosmos Energy's lack of respect for fundamental international law and the rights of the Saharawi people", stated Erik Hagen, chair of Western Sahara Resource Watch.

The UN has stated that further oil exploration will be in violation of international law if taking place in the disregard of the wishes of the people of Western Sahara. The Saharawi exile government has expressly condemned Kosmos activities and plans. Number of protests have started to emerge among the Saharawis in the occupied territory and in the diaspora.

Two rounds of seismic have previously been done on the Boujdour block. The companies taking part in those studies have all stated it would not resume such activities due to the political complications involved. In 2008, as Kosmos commissioned Dutch company Fugro to do the previous seismic 2D studies, Fugro stated it has "decided to abstain from any further involvement in Western sahara until the political situation has been resolved". The first company doing such seismic, Norwegian TGS-Nopec stated its withdrawal, and that it "appreciates the complexity of the political issues in the area and respects the views stated by Norwegian authorities. As a result, the Company has decided not to undertake any new projects in Western Sahara without a change in political developments. Further, the Company is committed to improve its procedures for risk evaluation on potential projects in disputed areas of the world". The company delivering supply vessels, Thor Offshore from Denmark, stated the same.

In order to find companies willing to do the studies, Kosmos has needed to look to China. BGP - subsidiary of CNPC - has done such exploration in the occupied territory in the past. The same company did similar studies from October 2012 to July 2013, and confirmed such operations in a mail to WSRW 5 March 2013 At that time, BGP was commissioned to do the job by French oil company Total, on the so-called Anzarane block off Dakhla, south of the location where the study is being done now.

Morocco has occupied most of Western Sahara since 1975 and -even if it had always put forward obstacles to the referendum for the people of the territory- it is not until 2004 that it officially refused to commit to past agreements on referendum. The UN is facilitating peace talks. As Morocco's oil programme on the Boujdour block started, the kingdom still agreed on carrying out a referendum on independence, in line with international law and the signed peace agreements.

The video to the right was made in port of Las Palmas as the vessel had ended its operation. On the same video, one can also observe the supply vessel Geo Service 1. 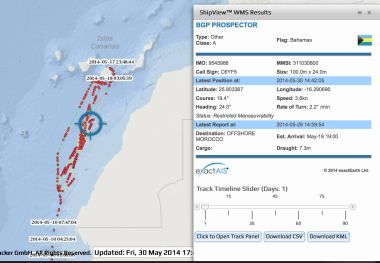 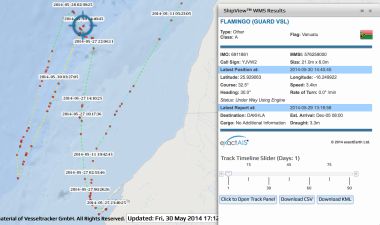 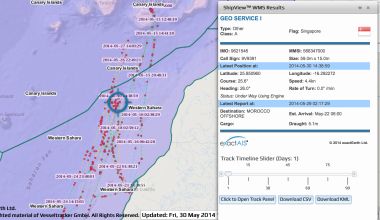 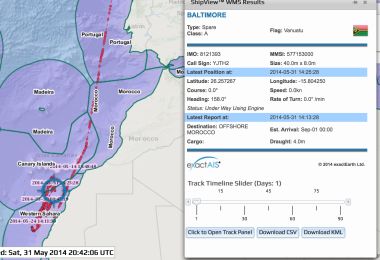 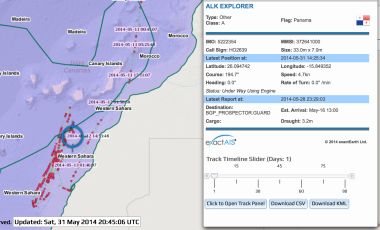