Support us
Alouat protested against Kosmos - was cut with razor blade

The director of a handicap institution in Western Sahara was attacked by police as he went out to the street with this poster.
Published 13 June 2014


Sidi Mohamed Aloat, the director of a school for handicapped in El Aaiun, occupied Western Sahara, took to the street on June 10 to show his objection towards US oil company Kosmos Energy.

Kosmos is planning to drill offshore the occupied territory even though the UN has stated that any further oil exploration or exploitation would be in violation of international law.

Yet, a drilling rig is soon on its way into the occupied territory.

Kosmos has not lifted a finger to seek the consent of the Saharawi people. More and more demonstrations have lately taken place against Kosmos Energy's plans. 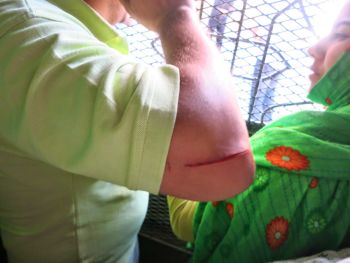 Morocco is brutally occupying the territory in violation of international law, and cracks down on all demonstrations of this kind. Political parties and civil society organisations that call for the right of the self-determination are illegal.

More than 100 UN resolutions call for the right to self-determination to be respected, and Morocco's claims to the territory have been rejected by the International court of justice. Kosmos Energy's partnership with Morocco is heavily condemned by the people of Western Sahara. 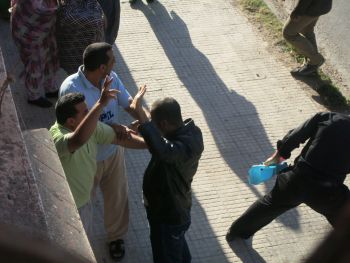 Alouat is leader of the school Ibsar Elkhair, and is himself physically handicapped. He was attacked by a group of policemen, one equipped with a razor blade, as he presented the banners against Kosmos.

One of the banners stated (in Spanish) that Kosmos Energy must not drill in the territory. 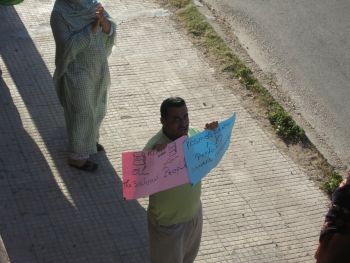 WSRW wrote in April of a similar incident. 18 year old Elfayda Khayya was beaten up by the police for trying to film her friends who tried to rise a similar poster. Khayya wrote to the company "How should we protest against your presence in our country?" The company has not yet presented ideas to Khayya as how the people should express their objection to the company's plans.