An American and a Canadian citizen were today kicked out of occupied Western Sahara. The two wanted to interview Saharawis regarding the US-Canadian exploitation of natural resources in the territory.
Published 17 January 2016


Photo above: The above photo of the police checkpoint was taken at the time when Foster and Espey were detained on the inside. 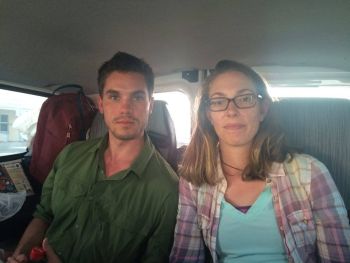 US citizen Michael Foster and Canadian Tess Espey traveled this morning to Western Sahara to interview Saharawis regarding the exploitation of natural resources in the territory.

The delegation took the bus from Marrakech last night, and arrived at the check point of El Aaiun at 11 AM in this morning, 17 January.

The police told the two that they doubted Espey and Foster had come to El Aauin to do tourism. Around 1PM they were deported in a taxi with other foreigners.

Five other foreign delegations have today been kicked out off the occupied territories, including people from Norway, Poland and the Netherlands.

"It is extremely undoable. At that point it was nothing we could do to get into the city. Our reasons were very legitimate, but it was definitely no way we would get in", stated Foster to Western Sahara Resource Watch.

"I think it is embarrassing that Canadian companies are pivotal in exploration of resources of Western Sahara. They should stop. It is unjust, underpinning the human rights violations. It is against the moral standings that Canada is trying promote on the world stage", Espey stated.

The last weeks have seen daily demonstrations by unemployed Saharawis in the occupied territories.

The Swiss-Russian company EuroChem was most likely behind a controversial imports of conflict minerals to Estonia in October.