Morocco's minister of foreign affairs - as expected - today propagated about his country's occupation of Western Sahara during the opening statement of COP22.
Published 07 November 2016

"Salahedinne Mezouar pointed to remarks from HM King Mohammed VI made on the anniversary of Morocco’s Green March (November 6) in which he called for Marrakech to be the COP of action", the official COP22.ma website notes.

That site is administered by the Moroccan government. The "Green March" refers to the Moroccan invasion of the territory of Western Sahara. The march was condemned by the United Nations at the time. 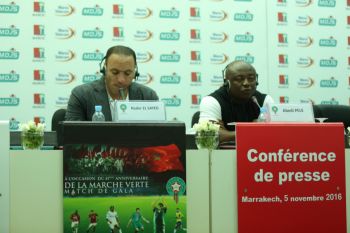 On the COP22.ma website there are now (see picture to the right) a photo from a press conference regarding a football match in the occupied territory which WSRW wrote about on 5 November. "On the occasion of the 41st anniversary of the Green March", the banner reads.

Mass graves are still uncovered of people from that time. Over 500 Saharawis - indigenous of Western Sahara - are still missing, and half the people of the territory are now refugees as a consequence of the invasion.

One of those who fled was Suelma Beirouk - vice president of the African Union - who is today deported from Morocco. The latest information from Beirouk is that she will be sent to Mauritania. She has been in police custody for more than 24 hours.

Western Sahara Resource Watch on 2 November published a report - Powering the Plunder – What Morocco and Siemens are hiding at COP22, Marrakech - outlining Morocco's energy projects on occupied land. Those projects are used by the Moroccan state phosphate company to increase its profits on mineral plunder of the territory.