On 20 June, three officially registered Saharawi fishermen organisations gathered in front of the Delegation of Maritime Fisheries in El Aaiun, to denounce the exclusion and marginalisation they face in the job market.
Published 29 June 2012


This story was first published on Fishelsewhere.eu, on 23 June 2012. 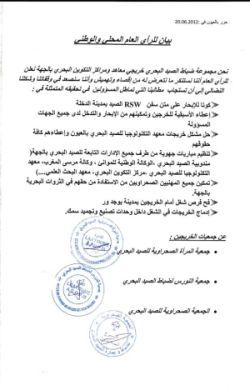 The protesters are graduates from the Technical Insititute for Maritime Fisheries in El Aaiun. In spite of their training, they claim that Moroccan sector officials systematically deny them the possibility of employment.

"All job interviews take place in Morocco, not here in El Aaiun. As a result, Moroccan graduates get jobs in El Aaiun and Dakhla. We don't even get a chance to compete with them for a job in our own town", says one of the protesters.

They also call for the Moroccan government to allow the fishermen from Dakhla the chance to work on the so-called RSW fishing vessels, a fleet of large and normally foreign owned vessels, operating from Dakhla.

Finally, the organisations express their stance that Saharawi fishermen should be allowed to benefit from the local fish stocks - something which they aren't now.


Click on the picture to the right for a larger version of the fishermen associations' statement (Arabic). 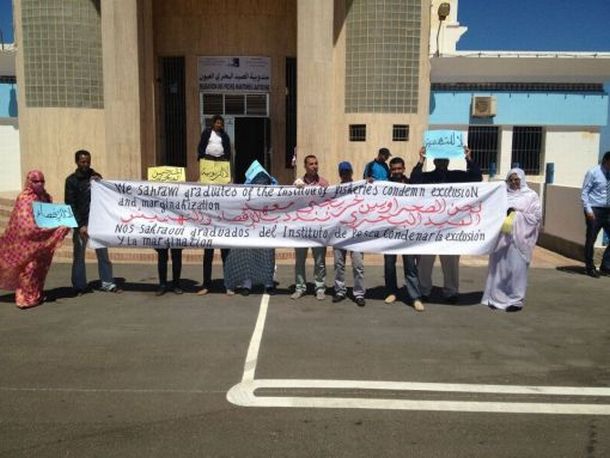 Demands of Saharawi fishermen in Dakhla, 25 May 2013

Saharawi fishermen ordered to explain themselves

Dozens of Saharawi fishermen who took part in the protest last Saturday in the harbour of Dakhla have been summoned by the Moroccan police.
29 May 2013

On Saturday, Saharawi fishermen blocked the entrance to the harbour of Dakhla for two hours, in protest of abominable working conditions, discriminatory recruiting practices and overfishing.
27 May 2013