Support us
Morocco seeks partner for another onshore controversy: Lemsid

Several seismic survey companies have deeply regretted their involvement in the occupied Western Sahara over the last decade. Now, Morocco is trying to partner with yet another one - this time onshore. WSRW warns industry to not fall into the trap.
Published 29 June 15 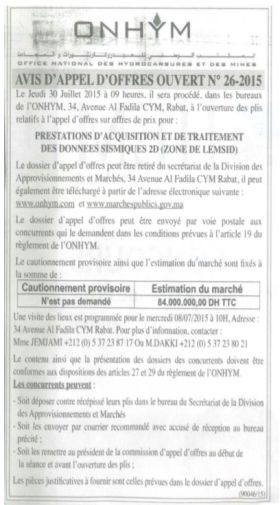 The new controversial block, Lemsid, is located in its entirety in the territory that Morocco is illegally occupying, south of the capital city of Western Sahara, El Aaiún.

The Moroccan state oil company ONHYM closes the tender on 30 July 2015, an assignment worth 84 million Moroccan Dirham. The tender can be seen in short version to the right, while the full version is downloadable here.

"The study area is located in Southern Morocco, between the cities of Smara, Laayoune, Boujdour and Guelta Zemmour", the tender states. This is incorrect. No state in the word, nor the United Nations, recognise this territory as part of Morocco. No reference in the tender documents mentions that the area is located outside of the internationally recognised borders of Morocco, nor does it refer to the legal rights of the people of the territory of Western Sahara. 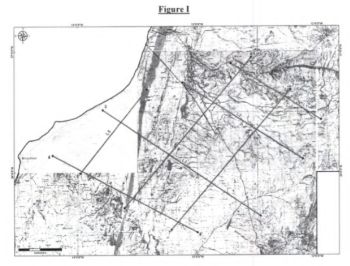 According to the tender document, ONHYM takes on the responsibility to secure passage authorisations from local land users and local authorities. No Saharawi organisation or representative , however, has ever been approached in relation to the tender, as far as WSRW knows. The UN's legal office concluded for the UN Security Council that any further exploration in the territory of Western Sahara must take place in accordance with the wishes of the people of territory. No such consent has been sought. Morocco invaded Western Sahara in 1975. Half the people sought refuge abroad.

Further exploration of the hydrocarbons are in violation of international law as long as the people of Western Sahara do not consent to it. This was the main conclusion of a legal opinion of the United Nation's Legal Office on behalf of the UN Security Council.

Previously, a number of seismic services companies have been convinced by Morocco to take on such assignments, due to ONHYM's or the operators' failure to specify the real location of the blocks. Nearly all of the seismic survey companies that have worked in Western Sahara have since regretted their involvement: