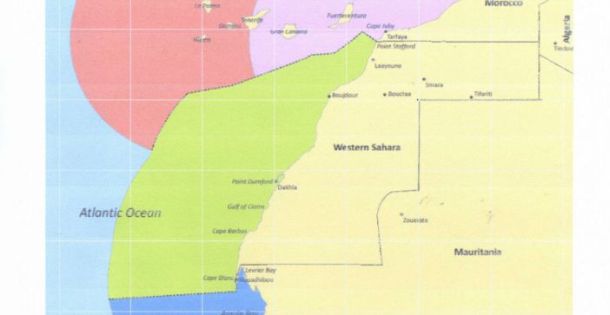 Yesterday, upon the visit of the UN Secretary-General to the Saharawi refugee camps, the Western Sahara government deposited the exact claims of its maritime zones.
Published 06 March 2016


Upon the visit of the UN Secretary-General to the Saharawi refugee camps yesterday, the SADR Government deposited with Ban Ki-Moon - as the depositary of the UN Convention of the Law of the Sea - the coordinates and charts of its exact EEZ claims.

"The coordinates and charts showing the EEZ outer limits will now be communicated to all UN member states trough their Permanent Missions in New York", stated Frente Polisario in a press release.

"In clarifying the outer limits of Western Sahara's EEZ, the SADR Government made clear that it is not willing to tolerate the illegal exploitation of its natural resources, including rich offshore fisheries resources, nor ongoing efforts by Morocco and complicit foreign companies to explore the seabed resources in Western Sahara's waters", the statement reads.

Download the entire media release, with the coordinates and maps, here.

No state in the world recognise Morocco's self-proclaimed demands of sovereignty over Western Sahara. Those have been rejected by the International Court of Justice. The UN deals with Western Sahara as the last unresolved colonial issue in Africa.

Ban Ki-Moon's visit yesterday to the liberated territories of Western Sahara, and to the refugee camps in Algeria was the first during his time in office.

A French-Norwegian seismic survey vessel has entered Saharawi waters four times. The company behind the exploration blames its Dutch client.

Several EU-flagged vessels have blatantly ignored and violated the EU Court judgment invalidating the EU-Morocco fish agreement in Western Sahara. Here they are.

The Moroccan government has today initiated draft regulations aimed at incorporating the waters of Western Sahara into its own territorial waters.