Two months have now passed since US oil company Kosmos Energy told media that it is in talks with the Moroccan state owned oil company ONHYM for the signing of a new oil agreement offshore Western Sahara. The licence lies off the territory under foreign military Moroccan occupation, and the block was to carry the name Boujdour Maritime. Still no news has been leaked on those highly controversial talks. No state in the world, nor the UN or the International Court of Justice, recognises the Moroccan claims to Western Sahara.

The information on those negotiations was also mentioned by Kosmos Energy's Scottish partner, Cairn Energy, in its annual report earlier this year. Western Sahara Resource Watch wrote how Cairn in that annual report kept including the territory of Western Sahara as part of Morocco.

If the agreement is negotiated and signed, how will Cairn present it externally? Most likely as a deal in Morocco.

WSRW has gone through the website of Cairn Energy, and sees that the errors from the annual report are systematic. The inclusion of Western Sahara into Morocco is made on practically all maps published since the first announcement of entering those waters. The error is committed in the website overviews over the firm's international operations, in company presentations and in press releases. See for instance the first press release they made about the Boujdour block 28 October 2013 and this announcement after their drilling had completed on 11 May 2015.

Just before Cairn Energy and Kosmos Energy started drilling in Western Sahara in 2014 - the first of its kind ever in the history of the occupation of the territory - WSRW published the report 'Platform for Conflict' about the affair. 243 organisations, the Western Sahara republic and the former UN legal counsel objected to the drilling.

Even though the UN Legal Office has stated that any further exploration of oil in the territory will be in violation of international law if the people of Western Sahara have not consented - that is exactly what happening.

Morocco has not even laid maritime claims to the waters offhore the territory that it holder under occupation.


The website of Cairn Energy currently looks like this below. Presenting its operations internationally, it skips Western Sahara altogether, claiming it is in Morocco. 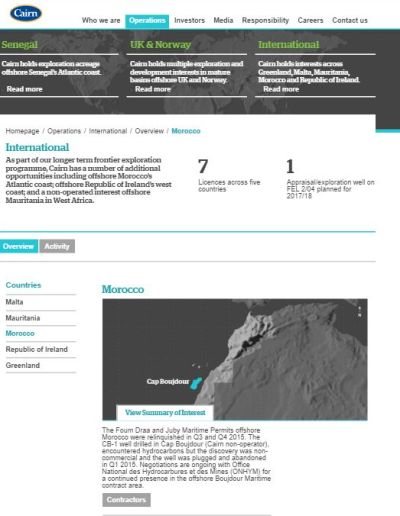 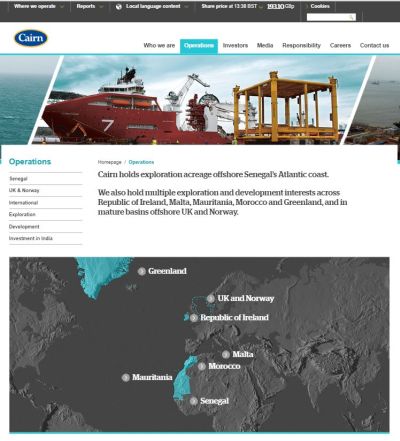 This one below is from a March 2014 company presentation. 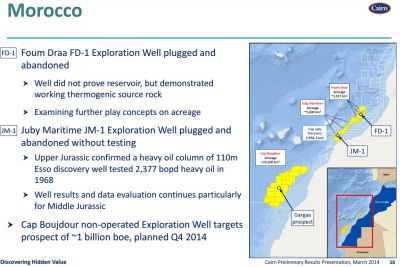 The below picture is from the report "Cairn au Maroc", from 2013, from the time when they had only licences in southern Morocco, before their signing of the farm-in on the Boujdour block in Western Sahara. 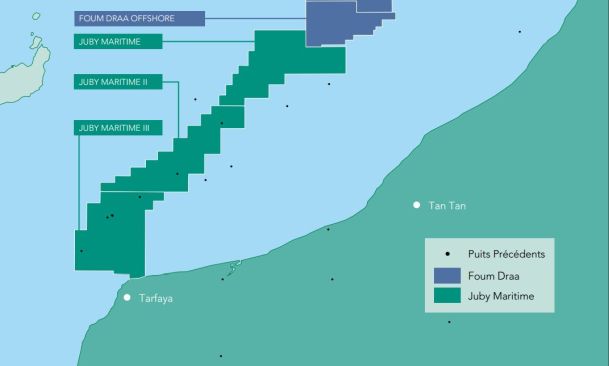 Below picture is from half year presentation in 2014.

The image at the very top is from a consultation document for Moroccan audience, 2013.

Following Cairn Energy's departure from Western Sahara, it has toned down the pro-Moroccan statements that it used to reproduce.
23 July 2018