It appears that the Moroccan government has shortlisted three Saudi companies to do develop the first phases of a large and highly problematic solar energy programme in occupied Western Sahara.
Published 15 November 2016


According to the news service PV Tech, the three companies ACWA Power, Fotowatio Renewable Ventures and Alfanar Company have put in the lowest bids for a public bid opening of the Moroccan Agency for Solar Energy's (MASEN) Noor PV I scheme; a tender to select a company to develop three photo-voltaic plants with an cumulative capacity of 170MW.

However, two of the three plants - the so-called Noor Laayoune and Noor Boujdour - are located in Western Sahara, a Non-Self-Governing Territory invaded by Morocco in 1975. To date, Morocco continues to occupy large parts of the territory in violation of international law.

No less than 20 consortia, grouping together 37 companies from around the world, applied in the tender. See a list of those 37 firms here. All three firms that have now been named as lowest bidders, are running separately from each other. ACWA Power, which has worked before on the Ouerzazate solar plant, ran solo, as did Fotowatio Renewable Ventures. Alfanar Company led a consortium which also included Bester Generación Sociedad Limitada, SolarReserve Development Co. LLC and Gaits Industries.

The Moroccan Agency for Solar Energy (MASEN) controls the tender process. MASEN was established by the Moroccan government in 2010 and made responsible for feasibility assessment, design, development and financing of solar projects in Morocco. 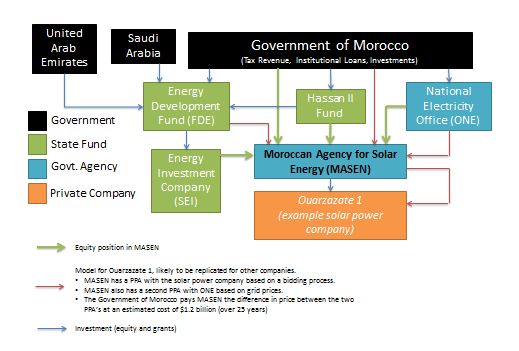 It is a limited company which is essentially state-owned; it is 25% owned by the Moroccan government, the State-owned electricity agency ONEE, the Hassan II Fund (100% state-sponsored) and the Société d'Investissements Energétiques or SIE (largely state-sponsored but with financial injections from Saudi Arabia and the United Arab Emirates).

The Moroccan king appoints head of MASEN: since its conception in 2010, MASEN's director has been Moustapha Bakkoury. Widely considered a man of the palace, Bakkoury combined his MASEN position with that of secretary-general of Morocco's Parti Authénticité et Modernité (PAM) from 2012 to 2015. As then US Ambassador to Morocco Robert Kaplan put it in October 2009: "Founded and directed by Fouad Ali El Himma, one of the king's closest friends, the PAM is widely perceived to be the palace's party".

Western Sahara solar plants expected to be operational in 2018

Morocco has started the construction of large solar industry infrastructure in the part of Western Sahara that it is illegally occupying.
30 June 2017