Support us
Vigeo Eiris goes back on false claim

The company which certified a Moroccan energy project in occupied Western Sahara has rectified a report it submitted to UN Global Compact in which it erroneously claimed that the UN body had approved of its operation.
Published 21 February 2018


The French-UK company Vigeo Eiris in 2016 certified a Saudi energy project in occupied Western Sahara, without first obtaining the consent of the people of Western Sahara. The territory is treated by the UN as being under decolonisation, and partially under foreign Moroccan occupation. Morocco increasingly cements the occupation through energy production.

"Vigeo Eiris were not found to have breached any of the 10 Principles of the United Nations Global Compact”, the company wrote on its report, published 15 January 2018.

However, UN Global Compact never made such an assessment. WSRW therefore on 31 January 2018 asked UNGC to request Vigeo Eiris to rectify the incorrect reference to the name of UNGC in the report – a report which was posted on the website of UN Global Compact itself.

The company refuses to answer questions concerning its operations and interpretation of international law. The map on the front page of www.vigeo-eiris.com ignores the UN and EU position on Western Sahara, and includes the territory as part of Morocco. Instead of referring to "Western Sahara" in its Communication of Progress report - posted on the UN website, it refers to "Western side of Sahara", which is not in line with UN terminology. The company uses different ways to argue why it should operate in the territory. Read that here.

On 27 February, the Court of Justice of the EU will rule on the EU fisheries practices offshore the territory. The Advocate General of the Court already underlined in an opinion on 10 January 2018 that self-determination is a human right, and that entering into agreements with Morocco for the territory of Western Sahara constitute a violation of that right. He underlined, referring to UN resolutions, that the territory is under foreign occupation, and that international humanitarian law applies.

Ironically, Eiris Foundation has a project on businesses in occupied Palestine and Crimea while the company facilitates business operations for the occupier in Western Sahara.

Besides the reference to UNGC having been rectified, there is also another correction in the new version of the report. Vigeo Eiris claims in its original report to have “responded publicly to WSRW”. WSRW in an article on 31 January wrote that "only one letter was sent from Vigeo Eiris to WSRW, dated 19 December 2016. Other letters, sent to Business & Human Rights Center (and not to WSRW) are not addressed to WSRW, and they fail to address the questions WSRW had sent the company. Letters sent from WSRW to Vigeo Eiris on 14 February 2017 and 3 March 2017 were never responded to, and the questions have not been answered."

Probably as a correction to that, Vigeo Eiris has corrected the reference to its letters to WSRW. It now reads: "Vigeo Eiris responded three times to these letters in public correspondence".

Read here all the questions that WSRW did not get an answer to from the company. 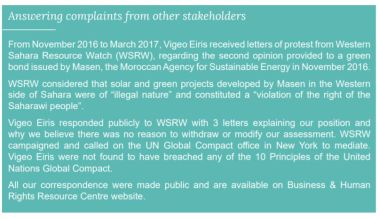 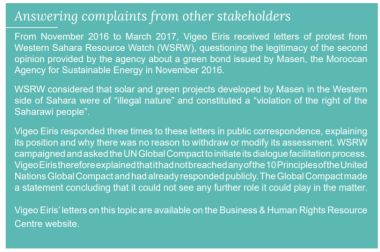