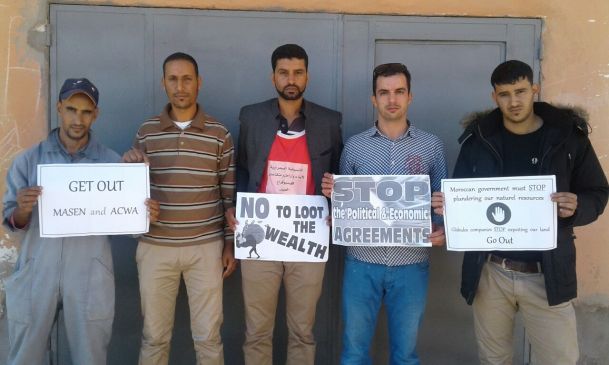 The company which has certified Moroccan energy projects in occupied Western Sahara applies an ever stronger Moroccan terminology on the Western Sahara issue than before. WSRW still seeks answers to its questions.
Published 14 February 2017


Above: A group of Saharawis on 30 November 2016 were denied access to a "public consultation" on Moroccan-Saudi energy projects in the occupied Western Sahara. International investors such as the EU and national development banks go to great lengths to avoid funding these programmes, but Vigeo Eiris has still made sure the projects get so-called "green bond" certification.

That business is controversial, as it violates international law and strengthens the Moroccan ties to the occupied territory. WSRW in November wrote a report about the industry.

Vigeo Eiris had in a letter to WSRW on 18 December 2016 not only confirmed the certification, but also defended it, applying an approach and terminology to the conflict similar to Morocco's. WSRW responded on 23 December 2016 with a letter, requesting further information.

That letter, of 23 December 2016, has still not been responded to by Vigeo Eiris.

What did happen, however, is that Vigeo Eiris has separately sent a letter to Business & Human Rights Resource Centre in which it defends its operations.

In that letter, the company refers to the territory of Western Sahara as “region of Sahara” which is a deeply Moroccan way of labelling the territory. Vigeo Eiris has not responded to questions on the seeking on consent of the Saharawi people, our questions on international law, or why it presents Western Sahara as part of Morocco on maps on its website. The mail it sent Business & Human Rights Resource Centre, in short, does nothing to address the concerns sent from WSRW to Vigeo Eiris on 23 December 2016.

The letter is co-signed by the Vigeo Eiris methods director who is also on the board of the state Moroccan body CESE which plays a key role in the Moroccan government's business approach to Western Sahara.

WSRW on 14 February 2017 sent a new letter to Vigeo Eiris, in which it laments the continued Moroccan representation of the territory and the conflict, urging the company to respond to the questions asked.

"As a very minimum, and particularly after the email exchange we’ve already had, one would have expected Vigeo Eiris to apply the United Nations terminology to the territory itself", WSRW comments in the new letter to the company.

Financial institutions which have previously relied on advice from Eiris before the merger with Vigeo will now be advised by WSRW to reconsider the independence and competence on issues of human rights and international law of the merged company.

"Vigeo Eiris not only consistently approaches the territory with a Moroccan narrative, but also secures finances for projects that violate international law. Vigeo Eiris has placed itself in a situation where it has lost credibility in matters of human rights and international law", WSRW chair Joanna Allan, told.

"In the past, WSRW has recommended Eiris as a supplier of ethical advice to institutional investors in Europe. Our recommendation today, after Eiris's merger with Vigeo, is the opposite. The statements by Vigeo Eiris on the matter of Western Sahara illustrates a company poorly advised on international law and human rights, not taking its own human rights responsibilities seriously. In addition, it is deeply concerning that it seems to not undertake proper due diligence on its own activities, that it secures finances for projects that are obviously set up in violation of international law and that it fails to answer questions from civil society", Allan said.

WSRW also sent a letter today a letter to Clean Bonds Initiative. This letter follows an earlier letter from WSRW to CBI on 19 January 2017.