This week, Western Sahara Resource Watch discovered that Vigeo Eiris had sent a mail to Business and Human Rights Resource Center (BHRRC) on 6 April 2017 regarding its controversial certification of bonds for Saudi/Moroccan energy infrastructure in occupied Western Sahara. The letter from Vigeo Eiris is a follow-up to concerns from WSRW previously posted on the same site.

However, Vigeo Eiris has still not responded to questions sent from WSRW to the company on 23 December 2016. No copy of the letter to BHRRC was sent to WSRW.

Vigeo Eiris is large on the Moroccan market, and repeatedly posts strong and pro-Moroccan positions on the occupation. On 3 March, WSRW published a story summarising the Vigeo Eiris scandal relating to the company's facilitation of projects in the occupied territory, including copies of our correspondence. The company has clarified that it has not carried out a due diligence.

In the company's new statement, it stresses that it is not legally obliged to seek the consent of the Saharawis.

"Vigeo Eiris now argues even further against its own raison d'être. The company's deeply legalistic approach casts doubt as to whether it understands the idea of corporate responsibility and its own obligations. Vigeo Eiris must, like any other company, assess the human rights implications of its operations. Our correspondence with the company suggests that it fundamentally fails on this aspect. Just the fact that it refuses to answer questions from civil society is enough to indicate that something is deeply wrong with the corporate social responsibility policies of the company", chair of WSRW, Joanna Allan, stated.

"We strongly urge the company to answer questions that we asked after they had confirmed its involvement. Such answers would shed light on what it means when it now asserts that consent is not needed in Western Sahara. We recommend Vigeo Eiris seek external due diligence advice prior to considering certifying any more projects on occupied lands, and find guidance on Saharawi consent from the UN Human Rights Committee, the Court of Justice of the EU and the UN Legal Counsel. Clients of Vigeo Eiris should study our baffling correspondence with the company", Allan stated.

The Court of Justice of the EU judged on 21 December that EU-Moroccan agreements cannot cover Western Sahara unless the Saharawi people has consented.

The new 6 April formulation from Vigeo Eiris furthermore:
-does not respond to the questions raised by WSRW. It has still never sent WSRW a reply letter of 23 December.
-again applies terminology on the territory which are deeply provocative for most Saharawis (‘Southern provinces of Morocco’), and which are not in line with any accepted or UN terminology.
-lends credibility to the issuer of the bond, Masen, as if that company has a right to be present in the occupied territory or to "report on the socio-economic conditions of the local populations".
-refers to an award given by Clean Bonds Initiative (CBI does not respond to the same questions, WSRW has written CBI three times).
-repeats its claim that it seeks to "not seek to intervene" in the conflict, yet, that is exactly what it has done.

The full text of Vigeo Eiris’s 6 April statement to the Business and Human Rights Resource Center reads as follows: 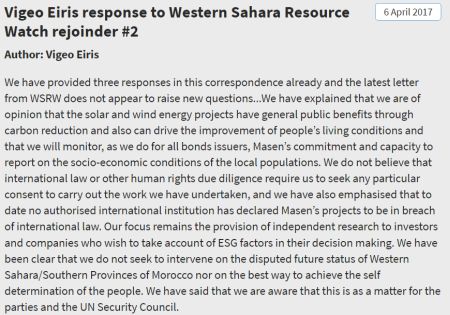