Support us
US imports of Western Sahara conflict rock to end 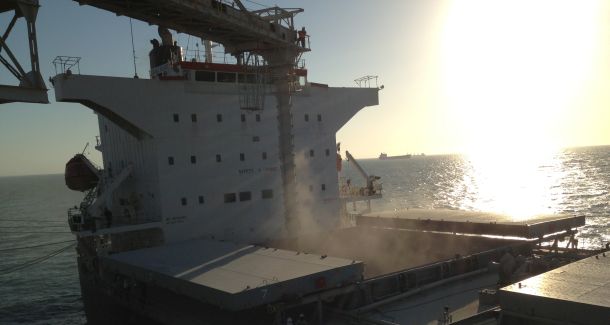 Above: The bulk vessel Double Rejoice seen on on 12 April 2012 loading phosphate rock in occupied Western Sahara, to be shipped to the US. The trade that has been going on for decades will now come to a stop.

Western Sahara Resource Watch (WSRW) only now has discovered an important announcement made by the company Nutrien, on 1 August 2018.

“Nutrien decided to close its small phosphate facility at Geismar, Louisiana, by the end of 2018 and will no longer require offshore phosphate rock imports starting in 2019“, the company stated in its 2nd quarter report.

The announcement entails that the company behind 50% of the phosphate imports over the last years has announced that it will completely terminate its purchases from Western Sahara. Nutrien had previously declared it would end imports of the contentious rock to its facility in Canada in 2018.

The above disclosure constitutes the final confirmation of what will be the end of United States' - and Nutrien's - imports of the controversial mineral. Henceforth, the number of companies currently importing the conflict mineral from Western Sahara will be reduced from four to three. The ones now remaining are Paradip (India), Ballance Agri-Nutrients (New Zealand) and Ravensdown (New Zealand). In 2012, there were 15 companies in 13 countries involved in the dirty trade.

The decision about the closure of Nutrien’s Geismar plant has been long-awaited. The CEO of the company on 25 January 2018 told its investors that an announcement would be made “by the middle of this year”.

“When Morocco no longer profits from these exports to North America, the chances are bigger that its government will engage in UN peace talks. We now call on the government and farmers of New Zealand to follow the rest of the international community in supporting the rights of the Saharawi people”, stated Morten Nielsen of WSRW in Denmark.

In July, WSRW reported that Nutrien lost its main (or only) client in Geismar: Innophos Holdings. Nutrien’s to-be-closed phosphoric acid plant and the neighbouring Innophos Holdings processing factory are connected with a pipeline structure. When making the decision to halt the purchases from Nutrien, Innophos referred to its policies of responsibility. Based on Innophos’ withdrawal, WSRW wrote that it was “a likely scenario” that the supplier Nutrien would also end its operation. This is now a matter of fact.

“It is a historic decision. The factory in Geismar has been the all-time biggest purchaser of phosphate rock from the occupied territory”, Nielsen from WSRW told.

WSRW has on a daily basis monitored the trade since 2011, and estimates the US imports to have been at these levels:

WSRW has been involved in letter correspondence with Nutrien – and its legacy company PotashCorp – for a number of years. Several international investors have blacklisted Nutrien, among them, the Norwegian Government Pension Fund, which this year sold 190 million USD worth of shares in Nutrien due to the controversy.

Based on Nutrien’s lack of policy on such imports, WSRW recommends that investors who have blacklisted Nutrien to maintain their decisions of exclusion until Nutrien has implemented such policy.

The latest vessel to arrive Geismar was the large bulk carrier m.v. Lady Giovi in August, a vessel operated by the Danish shipping company Ultrabulk. No vessels are currently loading in El Aaiún harbour in Western Sahara. As the factory is to close down by the end of this year, WSRW believes that the arrival of Lady Giovi could possibly have been the last (or one of the very last) imports into the US ever, after 30 years of plunder. The US previously also imported to Florida, but that importing company, Mosaic Inc, stopped the trade 2010, referring to the human rights situation in the territory.

The consequence of the North American withdrawal from the trade is that New Zealand farmers are the only players left involved buying from the Moroccan state owned company in Western Sahara. In addition to selling to New Zealand, the mine also supplies to OCP’s own subsidiary in India.

All other importers active over the history of the plunder have now stopped. The Moroccan government is sending a delegation to New Zealand this week to lobby for its interests in the occupied territory.

When WSRW started mapping the trade in 2011, there were 15 companies involved. 13 of them are no longer taking part in the controversy.


The history and end of US imports of Western Sahara conflict phosphates.
* 1980s. the Geismar, Louisiana, based company Arcadian Corp starts importing phosphate rock. The plant transforms phosphate rock from occupied Western Sahara into phosphoric acid.
* 1996. Arcadian is acquired by the Canadian company PotashCorp.
* Early 2000s. The trade is uncovered, and international investors start raising the matter with PotashCorp. The importer is blacklisted for unethical behavior by numerous investors, particularly in Europe. PotashCorp responds by issuing controversial statements defending the trade.
* 2013. PotashCorp’s Canadian competitor, Agrium, announces a trade agreement with OCP. From then on, Agrium imports heavily into Vancouver, Canada. Agrium quickly receives critique from investor community.
* 2017. A Vancouver-bound vessel for Agrium was detained in the Panama Canal for carrying phosphate rock from Western Sahara.
* From 2013 to 2018, Agrium and PotashCorp account for 50% of all global purchases of Western Sahara phosphate rock.
* 2 January 2018. Agrium and PotashCorp merge into a larger company, Nutrien.
* 25 January 2018. The new Nutrien management announces that it will no longer import to Vancouver, to the plant that used to be controlled by Agrium. The management states it will announce its intentions with the ‘PotashCorp’ imports to Geismar, Louisiana, "certainly by the middle of the year".
* 15 June 2018. Nutrien states to Business and Human Rights Resource Center that "A decision on the need to import rock for this facility is expected after a review of our end product customer needs which is expected to be complete before the fall this year".
* 2 July 2018. Innophos Holding, the company in Louisiana that purchase the end product from Nutrien’s ‘PotashCorp’ plant in Geismar, announces that it will no longer buy that product, citing reasons of responsibility.
* 1 August 2018. PotashCorp announced it will close its factory in Geismar. This marks the end of ‘PotashCorp’s’, and thus Nutrien’s, involvement. It entails that the exports from Western Sahara to the Americas have come to a complete stop.

More and more investors are kicking Nutrien from their portfolios for its imports of phosphate from occupied Western Sahara. But the company shows no indication of its stated intent to phase-out the controversial imports from by the end of this year.