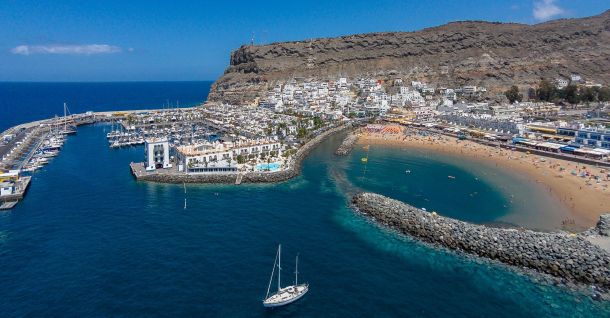 The bay of Mogán at Gran Canary Island will next week be covered in conflict sand from occupied Western Sahara.

The artificial tourist beach of Playa de Mogán, on the south west corner of Gran Canary Island, is soon to be covered with sand from occupied Western Sahara. The construction work will last from 2 to 5 of December, according to a Tweet from the Municipality of Mogán 29 November.

The Canary delegation of Western Sahara's national liberation movement Polisario wrote in a statement on 25 November that it "condemns" the project, stating that it "contributes to the occupation and to the Moroccan regime's repression of the civilian Saharawis" in the territory.

In 2018, Polisario's lawyers specifically warned about possible legal actions in Spanish courts against companies importing sand from the occupied territory.

Local pro-Saharawi associations in the Canaries have already protested the muncipality's plans to the local authorities.

It is not clear if the incident is related to the construction of the beach in Mogán, but the small bulk vessel Dura Bulk arrived Las Palmas harbour on the morning of 1 December 2019 with sand from Western Sahara. After a short while anchored offshore Port of Las Palmas, and without discharging the cargo, the vessel left Las Palmas at 11 am CET today, heading southwards along the coast of Gran Canary Island. Dura Bulk has for a number of years transported sand from Western Sahara to the Canaries. See graphic below of the ship movements today.

Western Sahara Resource Watch has over the years repeatedly written about the exports of sand from Western Sahara into Spain and Portugal.

The construction work on the controversial beach of Mogán in Gran Canary started 2 December.

About thirty persons gathered at the docks of Palma de Mallorca to protest the unloading of sand from occupied Western Sahara.
30 May 17

WSRW has received photos of the vessel 'Trio Vega' loading sand in the harbour of El Aaiun, the capital of occupied Western Sahara.