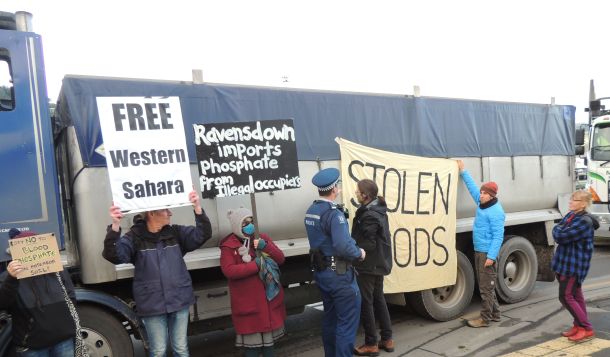 The pressure is mounting on the New Zealand importers of phosphate rock from occupied Western Sahara. Today protesters in Christchurch erected roadblocks to stop trucks from transporting the conflict minerals into the local Ravensdown fertiliser factory.

The bulk carrier Trans Spring (9615482, Hong Kong) was met with a cold welcome as it arrived in New Zealand yesterday, delivering an estimated 55,000 tonnes of phosphate rock from occupied Western Sahara to Ravensdown Ltd – one of the two Kiwi farmer cooperatives that are among the last remaining importers of the controversial commodity.

The vessel is currently at anchor at the port of Lyttelton, Christchurch, where protesters of Free Western Sahara Solidarity Aotearoa this morning, 23 June, managed to block the entrance of the nearby fertiliser plant of Ravensdown. The activists report that the blockade lasted for 5 hours, during which no trucks entered or left the site.

Last night, the Rail and Maritime Union (RMTU) delivered a letter of protest to the Captain of the Trans Spring, condemning Morocco's illegal occupation of Western Sahara and calling on the New Zealand Government to halt all imports of phosphate from the territory. This follows the New Zealand Council of Trade Union's resolution that was passed last year in solidarity with the people of Western Sahara.

"The people of Western Sahara have called for New Zealand to take action and stop buying blood phosphate. We are here today to make sure their voices are harder to ignore”, the protesters are quoted. "The call of the people is for Ravensdown and Ballance to stop importing phosphate from OCP until the people of Western Sahara are able to have a referendum for their independence”.

Photos of the protest actions can be found below. Click the photo for a higher resolution version.

Morocco’s exports of phosphate rock from the territory it holds under military occupation have dropped significantly in the last two years. WSRW has earlier this year published its 2020 edition of the annual P for Plunder report, documenting that the exports had halved from 2018 to 2019. Over the last decade, dozens of companies have halted imports due to increasing pressure from investors over human rights concerns. Yet Ravensdown and Ballance Agri-Nutrients persist and were responsible for no less than a third of 2019's exports ending up in New Zealand.

In an email to Western Sahara Resource Watch (WSRW), the New Zealand Minister of Foreign Affairs Rt. Hon Winston Peters wrote that "the New Zealand Government has consistently made it clear to companies importing from Western Sahara that they must comply with international law, seek independent legal advice, and that they import at their own risk", and that the Government had “requested that the fertiliser industry actively research the viability of alternative sources of phosphate that will meet the specific requirements of New Zealand pasture. Unfortunately, so far no viable alternative has been forthcoming but it is the Government’s expectation that efforts to find an alternative source will be ongoing."

The continued imports, however, indicate that the companies aren’t lifting a finger, much to the dismay of the Kiwi activists. "Ravensdown led us to believe that they had plans to find an alternate source of phosphate. We were disappointed to hear that a new shipment of phosphate from Western Sahara is due to arrive in Ōtepoti Dunedin, and that CEO Greg Campbell intentionally lied to us", they stated.

The UN-recognised political representation of the people of Western Sahara, the Polisario Front, is meanwhile threatening to take legal action against Ravensdown and Ballance Agri-Nutrients. Not hollow language, as is evidenced by the complaint lodged by Polisario in March this year against New Zealand’s Superannuation Fund. Polisario argues that the Fund has breached its responsible investment rules by owning a sizeable stake in Ravensdown and Ballance Agri-Nutrients. A hearing is expected in late October this year.

The New Zealand Fertiliser Association (FANZ), which favours the imports, has been allowed by the Court to intervene in the proceedings. FANZ states that it is concerned over the commercial and reputational risks now faced by its members, Ravensdown and Ballance Agri-Nutrients. In recent months, FANZ has stepped up its PR campaign on the phosphate imports from the last colony of Africa. It has appeared to be quite accommodating to the lobby-efforts of the Moroccan state-owned phosphate company OCP SA, which exploits occupied Western Sahara's phosphate reserves. OCP has reportedly retained consultancy firm SenateSHJ to polish its ever more controversial image in New Zealand. WSRW has contacted SenateSHJ in February this year, and again today, but has not received a response.

Will thyssenkrupp do further business in Western Sahara?

The German industrial engineering giant is unclear whether it will steer away from future projects in occupied Western Sahara.