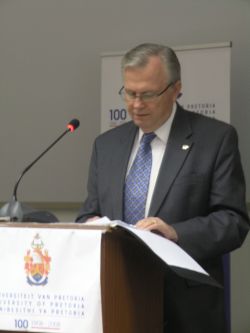 EU vessels have since 2006 trawled the waters offshore occupied Western Sahara under a Moroccan-EU fisheries agreement, in disregard of the wishes of the people of Western Sahara. These waters are known to contain some of the richest fish resources in the world.

The EU has previously claimed that the unethical agreement is legal, referring to an opinion that the erstwhile UN Legal Counsel and Under-Secretary-General for Legal Affairs, Hans Corell, wrote in 2002. But the former UN legal expert himself, having left office, clearly criticizes what he sees as an EU mis-interpretation of his text.

Corell, who is considered the world's foremost authority on the matter after writing the opinion to the Security Council, said it is "obvious that an agreement…that does not make a distinction between the waters adjacent to Western Sahara and the waters adjacent to the territory of Morocco would violate international law". Corell added: "As a European I feel embarrassed".

The clear statement from Corell was given at a law conference hosted jointly by the South African Department of Foreign Affairs and the University of Pretoria on 4 and 5 December.

Western Sahara Resource Watch, which in 2006 tried to have Western Sahara specifically excluded from the agreement, receives Corell's statements with approval.

"It proves that our interpretation of the international law in this matter has been correct all along. The fundamental breach of law and ethics which the EU is engaged in, must now be rectified immediately", said Cate Lewis, International Coordinator of Western Sahara Resource Watch. "This can only be done by amending the agreement to exclude Western Saharan waters from the Agreement, and by immediately revoking any European fishing licences authorizing trawlers to enter Western Saharan waters."

"Given that this illegal practice has been ongoing for years, WSRW demands that all prior financial transfers made by the EU to Morocco to secure access to Western Saharan fisheries resources be returned immediately. In order to ensure consistency with international law, this money must be allocated directly for the benefit of the Sahrawi population, including those living in forced exile", Cate Lewis said.

Background
Moroccan forces have illegally occupied Western Sahara since 1975. In contravention of more than 100 UN Security Council and General Assembly resolutions over three decades, Morocco continues to block efforts by indigenous Western Saharans – the Saharawis – to hold a referendum on whether they wish to become an independent state.

The International Court of Justice in 1975 stated that there are no territorial or sovereign ties between Morocco and Western Sahara. The EU Commission in April this year actually admitted that fishing is today taking place within Western Sahara.

WSRW is a global network with member organisations in more than 30 countries worldwide, working to protect the Sahrawi people's natural resources against Moroccan and foreign business interests in occupied Western Sahara.