The vessel 'Alycia' arrived on Tuesday 7 August 2012 at Risdon dock in Hobart, ready to discharge its controversial cargo of phosphate from occupied Western Sahara for the local fertilizer producer Impact Fertilisers.
Published 09 August 2012

The phosphate rock is used to make superphosphate fertiliser used mainly to improve pasture, but sometimes for crops.

The Maltese flagged vessel (IMO number 958336) loaded the cargo in occupied territory on 18 June 2012.
It is owned by a Greek shipping company. The image above shows the vessel docked at the harbour in Risdon, Tasmania, on 7 August 2012.

The Australian Western Sahara Association protests the purchase by Australian companies of phosphate coming from Western Sahara which is sold by the occupying power, Morocco, without consulting the indigenous Saharawi people, without their consent, and giving them no benefit.

WSRW has on several occasions called on Impact to halt its unethical purchases.

In October-November 2010 tens of thousands of Saharawis held a protest camp at Gdeim Izik, near the occupied capital, El Aaiun. They complained that they were being treated as second class citizens in their own country, while Morocco exploited their natural resources for its profit. 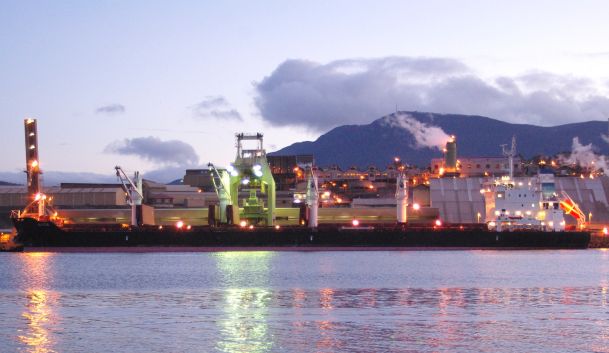