The French oil multinational confirms having renewed for 12 months its licence offshore "the Sahara region". The company keeps following the terminology of the occupying power of Morocco - their partner.
Published 03 February 2014


"Answering your requests, I can confirm that Total and ONHYM have agreed to prolong for one year the reconnaissance contract (which is not a “license”) relative to the Anzarane area, on the basis of the Joint Declaration of principles that has been made public on our respective webpages. This Declaration recalls our common guidelines on this issue, in compliance with the international legal framework and Total’s code of conduct", a Total spokesperson stated in a mail to Western Sahara Resource Watch (WSRW) 3 February 2014.

The 12 month prolongation was signed in December 2013.

Last summer, the Norwegian insurances company KLP, blacklisted Total from its portfolios since, selling its 52.6 million € investment, stating that "Total’s activities on the continental shelf off Western Sahara’s coast may be linked to breaches of fundamental ethical norms". According to KLP's research, Total had an option to prolong the deal with 6 months. Total's renewal is thus twice that expected length. WSRW knows that other ethically minded investors have awaited to see what Total would do in December 2013 before taking further action.

Total has now also published on its webpages a) Information about its operations; b) a joint statement by Total and the Moroccan state oil company regarding the agreement for Western Sahara, as well as c) a plan of Moroccan government to develop its "Southern Provinces".

In the statement signed by Total and the Moroccan state oil company, the two parties label the territory "Sahara region", which is the Moroccan terminology. Total writes explicitly "Southern Provinces" on a link on its own webpages. The activities take place offshore the part of Western Sahara that is occupied by Morocco. No states in the world recognise the Moroccan claims to the territory. The occupation has been condemned by the UN.

Most importantly, in the joint statement with ONHYM, Total specifically declare it has intentions of exploration and production in Western Sahara. The statement reads that the two parties "declare their common determination to contribute to the exploration and production of hydrocarbon natural resources in the zones of interest or activity onshore and offshore, including the Sahara region". It could not be clearer. Total goes far in stating it has plans for even more advanced work.

WSRW has previously asked Total what it would do to seek the consent of the Saharawi people. The company has consistently refused to answer questions regarding the rights of the people of Western Sahara to consent to such deal, as described by the UN Legal Counsel. See the WSRW report "Totally Wrong" here.

The company last year answered to such request that "Total, as an Energy Company, does not deem itself legitimate to have views on political or diplomatic subjects that belong to the United Nations and that are still being debated within the relevant international institution". Now, it seems Total views that it is only necessary to relate to the Moroccan government - and apparently only in relation to exploration and production of hydrocarbon - not at this level of exploration.

Total seems to miss that elementary point: Morocco is not in a posititon to assess the Saharawi's wishes. Total has also now published a new document "Our Societal Commitment", where the Total CEO claims that the company is following Corporate Social Responsibility. The same document outlines a map of Western Sahara as part of Morocco (see at bottom). 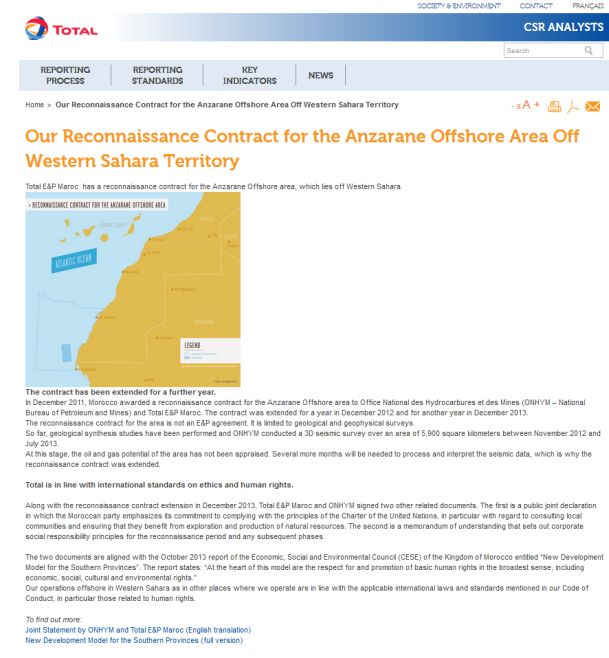 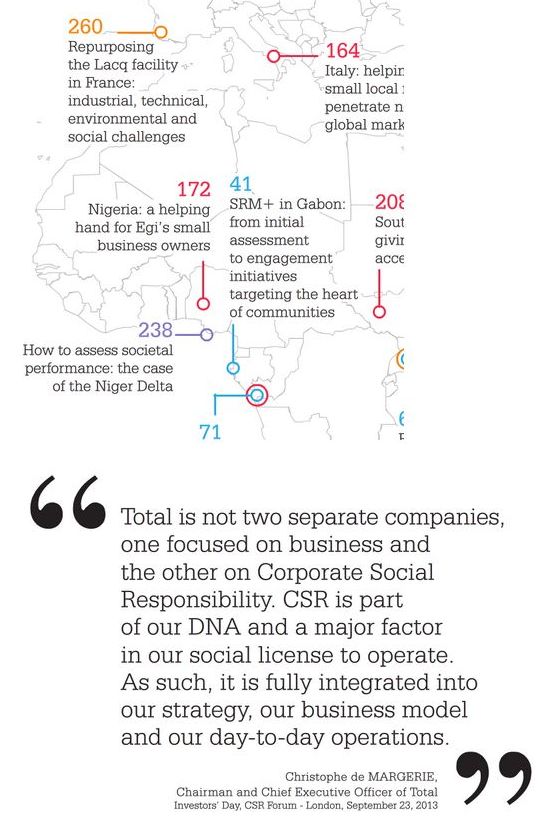 In a move that surprised no one, the EU Council has appealed the recent EU Court of Justice stopping EU trade and fisheries in occupied Western Sahara. But Council was not unanimous. UPDATE 06.12.2021.