The following was posted by the news service PESGB in April 2014, ony a few months after the signing of the agreement. (Click on image for higher resolution.) 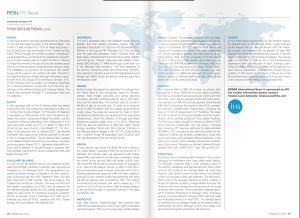 "New Age (African Global Energy) has received from ONHYM the operatorship of the Foum Ognit exploration permit covering 7,790 sw km in the Aaiun-Tarfaya Basin (Western Sahara). The acreage is located north and adjacent to the Kosmos operated Cap Boujdour I & II blocks, in waters ranging from 50 to 3,000 m deep. The contract, signed in December 2013 is valid for three and a half years and comprises four blocks. The work programme will include geological studies, the reprocessing of existing seismic data, and the acquisition of 2,000 km of 2D and 1,000 sq km of 3D seismic data. New Age has Glencore and ONHYM as partners in the lease. Ras Juby is to the date the only discovery in the Aaiun-Tarfaya Basin. The offshore heavy oil find of Late Jurassic age was made by Exxon in 1969 and deemed non-commercial. Barely a dozen of offshore wells have been drilled in the basin and none for almost 24 years. "

A Glencore investor presentation on 10 December 2014 mentions that they are operators in Boujdour Offshore licence where they have a 38,25% interest, but does not mention it is operator on the Foum Ognit, where they have a 18,5% interest. Both are located offshore occupied Western Sahara. As the gazettes mention no other partners on the block than Glencore, New Age and the Moroccan state oil company ONHYM, it would be safe to conclude New Age is the operator on Foum Ognit.

That story mentioned the publication of the information in the Moroccan government public gazette dated 19 June 2014. That gazette is now also in French.

The first WSRW mention of the New Age/Glencore licence in Foum Ognit was made in an article in October 2014 and in the report A Platform for Plunder the same month.

The exploration deals in Western Sahara are in violation of international law, according to the UN. No state in the world recognise the Moroccan occupation of Western Sahara.