Support us
ONHYM offers yet another block in occupied territory

The so-called "Boujdour onshore" oil block - which previously was owned by ONHYM itself, has now been renamed and offered to the industry.
Published 27 November 2014 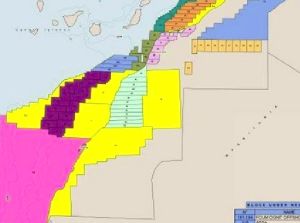 The block used to be 100% owned and operated by the Moroccan state oil company ONHYM, under the name "Boujdour onshore".

Now, WSRW has observed that the block has been renamed to "Block 188" and offered as "open acreage" to the industry.

See an old map to the right, with the ONHYM owned "Boujdour" onshore block marked in light blue.

Another change on the block distribution is that the onshore block XI seems to have been cut in half.

WSRW has previously reported on seismic exploration and what appears to be some sort of test drilling on that block, see videos and photos of that "Boujdour onshore" block operations here.

The UN stated in 2002 that any further oil exploration or exploitation in Western Sahara would be in violation of international law if the people of the territory do not consent to it. They don't.

Several seismic survey companies have deeply regretted their involvement in the occupied Western Sahara over the last decade. Now, Morocco is trying to partner with yet another one - this time onshore. WSRW warns industry to not fall into the trap.

These trucks are laying the ground for illegal oil industry

Morocco is continuing its oil programme on the Boujdour onshore block. These cars were filmed as they did geological surveys in the occupied territories.