An interactive map of Moroccan oil licences, on the website of the Moroccan oil agency ONHYM has been updated for the first time since June 2015.

The map is dated 13 October 2016, and reveals that the status of the block called Tarfaya Onshore is still not determined. 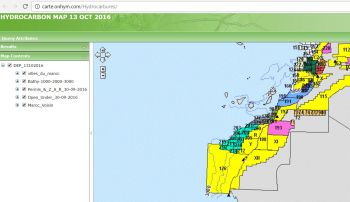 WSRW wrote on 31 July this year that the status of the Tarfaya Onshore block was still unsettled. Since 2008, the Irish company San Leon Energy has had an interest in this particular block that is partially located in occupied Western Sahara and partially inside the territory of Morocco proper. From September 2014 onwards, San Leon has been operating the block with a 75% interest.

San Leon in 2015 carried out the first onshore drilling operation in the history of the Western Sahara occupation. In October 2015, thousands of refugees protested against the operations of the company on that block.

It is not clear why San Leon has failed to renew the Tarfaya Onshore license. As WSRW has previously reported, San Leon has been delayed in its operations on the two blocks for which the Moroccan government has accorded them a license. The second block is the Zag block, wholly located in Western Sahara.

Further oil exploration in Western Sahara is in violation of international law unless it is expressly wished by the people of the land, according to the UN. San Leon has stated very clearly that it has chosen to side with the Moroccan government in the conflict. The company has been excluded by several international investors.

San Leon still claims on its website to be operating the Tarfaya onshore block.

Saharawis in occupied Western Sahara: "Shame on you San Leon"

Saharawis in the occupied parts of Western Sahara continue to speak out against Irish/UK company San Leon Energy's plans to drill for oil in their homeland. "Stop supporting brutal occupation of Western Sahara", they say.
12 August 2015