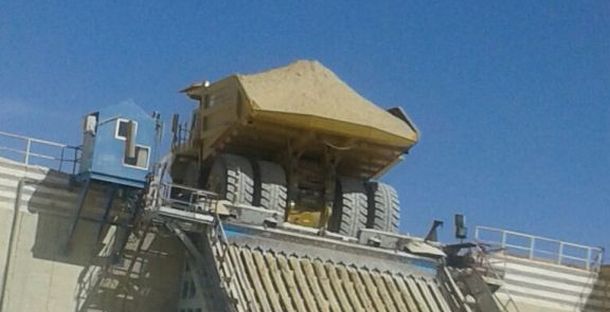 Trucks of the US company Caterpillar transport phosphate rock in occupied Western Sahara.

Western Sahara Resource Watch has received images of Caterpillar trucks operating in the Bou Craa mine.

The phosphate mine in Bou Craa is located in the occupied parts of the territory of Western Sahara and operated by the Moroccan state-owned company OCP. Morocco occupies Western Sahara - and plunders its large phosphate deposits - in violation of international law. WSRW writes annual reports about the exports of the conflict rock: the latest edition was published in February 2020.

The trucks we have identified are of the type MT3300, made by a company called Unit Rig, which in 2011 was taken over by Caterpillar. The photos that we have received are most likely a few years old, we would guess from around 2016.

An official licensed Caterpillar agency was been established in El Aaiún in the occupied territory by Tractafric Equipment Corporation in 2013 [or download]. Tractafic is a subsidiary of French group Optorg, which is part of the Moroccan holding agency SNI, primarily owned by the Moroccan royal family. The company claims on its website that "Laayoune" (French spelling of El Aaiun, as adopted by Morocco) is located in Morocco. Here is an erroneous map from the company's website.

WSRW wrote Caterpillar for the first time on 10 April 2020. The letter contained questions relating to the company's interpretation of international law and its possible obligation to undertake maintenance on the vehicules seemingly associated with the mine. The company has not responded.

A video on Instagram claiming to be from Boucraa mine in 2018 also shows Caterpillar trucks in action on the occupied land [or download picture].

Two OCP Powerpoint presentations from 2005 date the Caterpillar purchases back to the 1980s. See those here and here.

The use of the MT3300 Caterpillar trucks by OCP is mentioned in this university study , albeit not specifying whether they are being used in Boucraa or elsewhere. This OCP Tweetpic of an MT3300 from 2009 is probably taken in Morocco, not in Western Sahara.