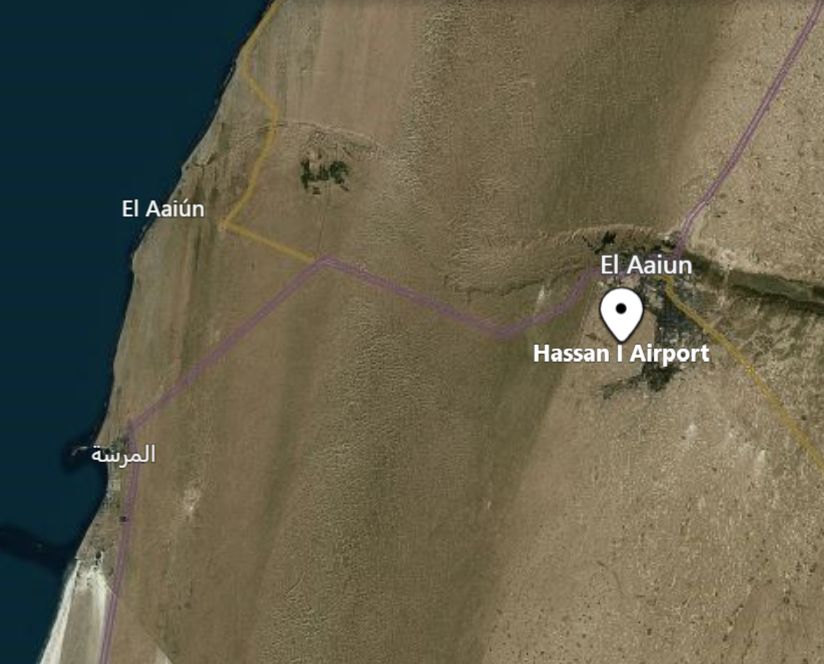 The EU Commission has clarified that Western Sahara is not covered by any EU aviation agreement, and that it does not seek to include it in the EU-Morocco aviation deal. Yet some EU airlines are still offering flights into the territory - now effectively a war zone.

According to the European Commission, "no negotiations are envisaged in order to include the Western Sahara in an aviation agreement”.

This is clarified in a letter from the Commission that Western Sahara Resource Watch (WSRW) has recently obtained. The letter was sent by the Commission Directorate-General for Mobility and Transport to the Irish MEP Ciarán Cuffe on 6 March 2020.

The clarification comes on the back of the EU Court of Justice nullifying the application of the EU-Morocco aviation agreement to Western Sahara in its ruling of 30 November 2018. The judgment specified that the territory of Morocco must be understood as "referring to the geographical area over which the Kingdom of Morocco exercises the full range of powers recognized to sovereign entities by international law, to the exclusion of any other territory such as that of Western Sahara". The Court added that including Western Sahara infringes on the rules of international law, "notably the principle of self-determination referred to in Article 1 of the United Nations Charter and the principle of the relative effect of the treaties" (art. 27). "The European Union cannot validly share an intention of the Kingdom of Morocco to include the territory in question in the area of application of the Agreement" (art. 33).

As it stands, Western Sahara is thus not covered by any EU aviation agreement. There is no legal framework in place to govern commercial airport services between the EU and the last colony in Africa. Companies such as Transavia, Air France and Binter, operating an airline to occupied Western Sahara, are doing so in a legal vacuum.

The EU Commission is aware that this is highly worrisome for passengers and crew in terms of insurance and safety, stating that the CJEU judgment “made clear that the definition of territory contained in the Euro Mediterranean aviation agreement is not covering Western Sahara. This being so, any airline certified by an EU Member State has to comply with EU rules concerning, in particular, the safety of its operations, the licensing of its crew and the maintenance of its aircraft, irrespective of the territory in which the airline operates. The Member States are well aware of the order.”

Yet in spite thereof, WSRW notes that Air France, Transavia and Binter still offer flights to the territory. On top of that, war broke out in Western Sahara five days ago. On Friday, 13 November Morocco’s military intervention ended the three-decade old ceasefire in Western Sahara. At present, there are clashes ongoing in different parts of the territory.

The Commission’s position on not renegotiating the deal is significant, as in the case of both the EU-Morocco trade deal and the EU-Morocco fisheries agreement, it did enter into renegotiations with Morocco with a view to including a specific reference to Western Sahara in the territorial scope of the agreements. The Commission noted in the letter to MEP Cuffe that the Court's decision on the aviation deal will not be renewed "like it was done in the case of agricultural products and fisheries, which are pending before the General Court”.

The EU Court of Justice had nullified the application of the trade and fisheries deals in Western Sahara, arguing that Morocco had no sovereignty over the territory, which has a “separate and distinct” status from any country in the world, including Morocco. The Court stated that the people of Western Sahara are to be regarded as a third party to the EU’s dealings with Morocco, and are to give their consent in order for any such deal to lawfully affect their land. Given the Court’s arguments, it is doubtful whether merely including a quick reference to the territory in the territorial scope of agreements with Morocco, without the consent of the Saharawis, will hold up in Court where the cases are now again pending.

It is unclear why the EU’s approach to the Court ruling on the aviation agreement differs so manifestly with its response to the Court rulings on the Trade and the Fisheries Agreement. In the latter two cases, the EU opted to renegotiate these deals with Morocco to expressly include Western Sahara in the territorial scope. Now, on the aviation deal, it essentially accepts the ruling. One reason may lie in the fact that an aviation agreement is a mixed agreement, meaning it touches on competences that are exclusive to the EU and exclusive to the Member States. A change to such an agreement would then not only have to go through a ratification process in the EU institutions - which was enough for the trade and fisheries agreement - but also in each of the EU Member States. Are some Member States expected to not ratify an extension into occupied Western Sahara?

Tomorrow, the European Parliament is scheduled to vote on an amendment to the EU-Morocco Aviation Agreement - without any clarifications from the EU Commission as to how the proposal aligns with the 2018 Ruling of EU Court of Justice, invalidating the application of that very Agreement to Western Sahara.

Update: the European Parliament has postponed all votes scheduled to take place on 10 March to a later date, due to the COVID-19-crisis.

BREAKING: the Court of Justice of the European Union has ruled that the EU-Morocco Aviation Agreement does not apply to Western Sahara.

On 24 April 2018, the liberation movement of Western Sahara brought action against the EU Council for concluding an aviation agreement with Morocco that includes the territory of Western Sahara.
18 June 2018

Interview with Jytte Guteland: 1 of 5 MEPs evicted from Western Sahara

“I think this incident should alert people about these EU-Morocco trade negotiations on products from Western Sahara: they are not transparent at all”, says Jytte Guteland, socialist Euro-parliamentarian from Sweden.