Support us
Metalex hints of resuming work on occupied land 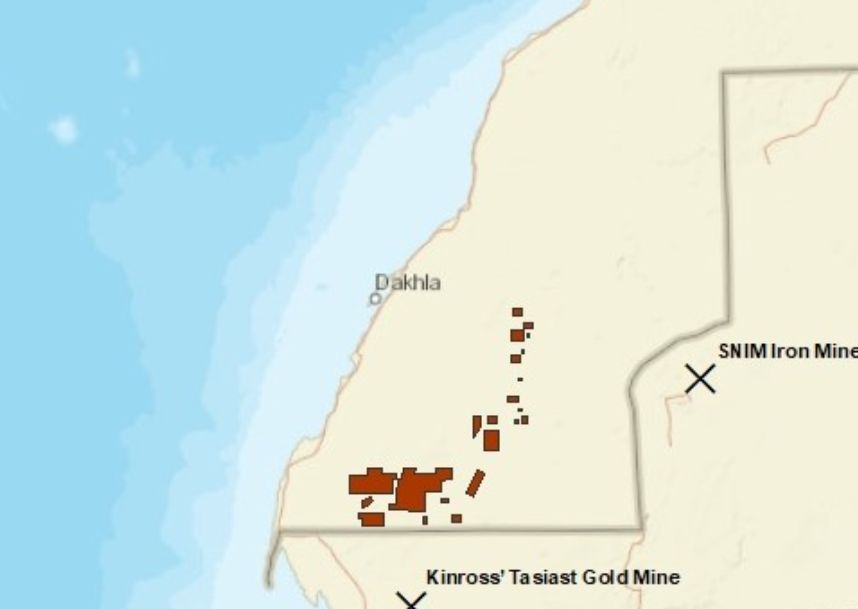 After a 6-year hiatus in Metalex’ controversial mineral exploration in occupied Western Sahara, the Canadian company sends signals of entering into a new deal with the Moroccan government.

The map above is a screenshot from Metalex' website.

After a 6-year pause in operations, the Canadian mining company Metalex has introduced new formulations and updates in its 2020 and 2021 reporting, suggesting that its exploration activities in occupied Western Sahara could be resumed.

In a report dated April 2020 that was filed with the Canadian company registry, there is mention that a “change in the mining laws required the re-negotiation of the Company’s agreement with ONHYM; the Company is in the process of defining the terms of this new agreement with ONHYM.” ONHYM is Morocco's National Office for Hydrocarbons and Mines.

In a similar report, submitted on 15 March 2021, an additional element was added: “Based on the results to date, 22 separate blocks totalling 4,021 square kilometres have been retained for continued exploration”, the company wrote. These 22 blocks are now also found on the company's website (or download). The Metalex claim in Western Sahara is substantially smaller than the 17,100 square kilometer blocks that it presented on its website in 2016 or in 2018.

The files submitted to SEDAR, the Canadian publicly traded corporate securities registry, also include a "certification of interim filings" in which Metalex's CEO ironically states that "the interim filings do not contain any untrue statement of a material fact or omit to state a material fact." Metalex declares, consistently, in its financial reports that its operations take place in “Southern Morocco”, which is factually incorrect. The clearly erroneous reports have been audited by a Vancouver-based accounting firm. WSRW alerted the accounting firm in May and July 2021 about the false information in the report.

The incorrect Metalex reference to the location of its licences is made both on the company’s website and in its financial reporting to the Canadian authorities.

References to an upcoming renegotiation have been copied-pasted by Metalex from one report to the next for a few consecutive years now, but not in the way as is currently being presented. Financial statements from 2019 and 2020 indicated that “The Company’s 36 month agreement with ONHYM has expired and the Company is in the process of extending it for a further 18 months.” The same formulation of an 18-months renewal dates back to reports from April 2015. A 36-month agreement with ONHYM expired in 2014. “Despite delays in obtaining the extension, the Company continues to work with ONHYM to revise the agreement”, Metalex wrote in 2019.

The endeavour is a joint venture between ONHYM and Metalex, with the Canadian company holding a 60% contributing interest. A map made by the Moroccan state oil and mining company ONHYM on 26 January 2021, refers to ONHYM's existing partnership with Metalex.

The Canadian company has licences in three countries. In addition to assets in Western Sahara, it has licences in Canada and South Africa. The South African assets were aquired in December 2020. South Africa is one of the most vocal supporters of the Saharawi people's struggle for self-determination and independence.

Metalex is hoping to find kimberlite-hosted diamonds in the occupied territory, as well as commercial deposits of gold, base and precious metals, platinum groups metal and iron ore. In the over 3,000 samples that have been collected and processed by Metalex since 2004, the company has reportedly found diamond indicators in 18 areas, gold in 38 areas, Cu-Co+/-Ni +/-Zn in 30 areas, Zn-Ni-Pb in 15 areas, uranium in 6 areas. A previous version of the company website shows that most of these findings were distributed between their former Tichla and Awserd blocks.

The 2019 financial statement explains that during the financial year ending in April 2017, the company had had 53,000 Canadian dollars costs in “laboratory analysis” for the operation. These are the last real work costs reported by the company from the controversial operation. Both parties - Metalex and the Moroccan government company ONHYM - are responsible for funding their respective interests. The Company’s portion of “the minimum annual exploration commitments pursuant to the terms of the agreement” was estimated as $2,900,000 in 2011, $1,725,000 in 2012 and $690,000 in 2013 (all in Canadian dollars).

The references to further airborne studies were removed from its website in 2020 or 2021. The company has previously written on its website that it had planned “to fly a significant airborne geophysical survey over the license; carry out systematic follow up sampling and prospecting of priority anomalies; and drill testing." Its website in 2018 stated something similar.

“From August 2011 to March 2012, a 88,146 line kilometer magnetic and radiometric survey that was flown over virtually the entire 17,100 km2 license area where the extensive geochemical survey indicated potential for a variety of commodities. The survey data has been processed and interpreted by Scott Hogg and Associates”, the company wrote.

Metalex’ operations in Western Sahara date back to May 2004, when the company entered into an agreement with ONHYM to conduct preliminary exploration work, in order to identify areas for further examination. In May 2005, the Company added additional areas for exploration work on the same terms and conditions as included in the first agreement. The agreements were governed by the laws and regulations of Western Sahara's neighbouring country of Morocco and ran until November 2006. In April 2011, the Company entered into a new joint venture agreement with ONHYM for further exploration of the claim areas.

Uranium, diamonds, gold, niobium. ONHYM\'s mining programme in southern parts of occupied Western Sahara is speeding up. See where their projects are here.