Photo: A Cabot 750 rig, like the one used by San Leon to drill in occupied Western Sahara.

It will take an expected 30 days for the rig to reach the envisioned depth of 2000 metres.

San Leon Energy has obtained its licence from the Moroccan government, and has consistently stated that its drilling operation would take place in Morocco. However, the site of the drill is located precisely in the parts of Western Sahara that has been illegally occupied by Morocco since 1975. The United Nations consider Western Sahara a Non-Self Governing Territory, or colony, whose people have the right to freely determine the future status of their homeland and its resources. Morocco has blocked the exercise of that right to self-determination for decades, yet proceeds to sell of the Saharawi resources as its own.

Just two days prior to the El Aaiun-4 spudding, Saharawis living in Algerian refugee camps as a direct result of Morocco's invasion of their homeland, were protesting the company's planned operation. See photos below. Protests in both the refugee camps and in the occupied territory have been going on for some time.

In July, the Saharawi president, residing in exile in the Algerian refugee camps, wrote to the UN Secretary General to ask for UN intervention to prevent San Leon from drilling. He called Morocco's oil search in Western Sahara, with the aid of companies like San Leon Energy, "a serious violation of international law and of the permanent sovereignty of the Saharawi people over their own natural resources". 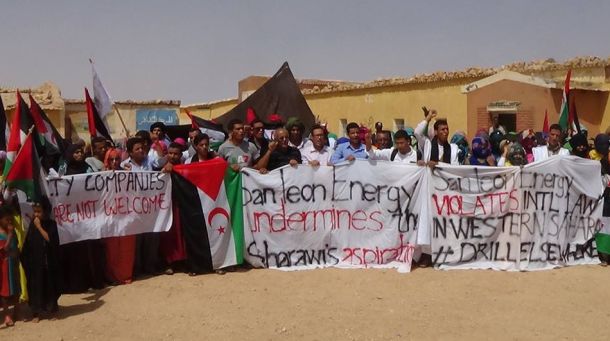 Saharawis in occupied Western Sahara: "Shame on you San Leon"

Saharawis in the occupied parts of Western Sahara continue to speak out against Irish/UK company San Leon Energy's plans to drill for oil in their homeland. "Stop supporting brutal occupation of Western Sahara", they say.
12 August 2015