Support us
Danish vessel with plunder cargo detained in Panama

For the second time this month, a vessel carrying conflict minerals from occupied Western Sahara has been detained by a national court. This time: the Danish vessel Ultra Innovation heading to Canada.
Published 18 May 2017

The Danish vessel Ultra Innovation was last night detained under court order while transiting the Panama Canal. The vessel carries phosphate rock which the Moroccan government has plundered in Western Sahara, a territory that it holds under military occupation. The cargo is most likely destined for the Canadian company Agrium.

The vessel is owned by Danish shipping company Ultrabulk, the biggest transporter of such phosphate globally. Around noon CET, 18 May 2017 the vessel had anchored up on the Pacific coast of the canal, close to Panama City.

The people of Western Sahara has not allowed Morocco to export such phosphates from the territory.

Over 200 million dollars worth of phosphate rock was shipped out of occupied Western Sahara last year, a recent report from WSRW shows. Canada is the biggest importing country, the report uncovered.
The incident follows less than three weeks after a similar development in South Africa. Today, 18th of May, a hearing will take place in a court in Port Elizabeth, South Africa, regarding the ownership of a cargo which Morocco tried to export on another bulk vessel from the occupied territory to New Zealand.

Ultrabulk ships have featured in about one-third of the shipments to Agrium since the company announced in September 2011 that it would start importing from “Morocco”. Neither the Canadian importer, Agrium, nor the shipper Ultrabulk has ever responded to questions from civil society as to whether or how it sought the consent of the people of the territory. Reports published by Western Sahara Resource Watch in 2017, 2016, 2015 have placed Agrium as the leading importer of such goods from Western Sahara.

Mr Emhamed Khadad, member of the Frente Polisario, the Saharawi independence movement, remarked that: "The Saharawi people wanted their government to act. We could no longer tolerate the myth that the mining and export of phosphate rock was somehow a benefit to that part of our people under occupation inside Western Sahara. And our people in the refugee camps haven’t seen anything from the trade. Consider this: A high quality phosphate rock for agricultural fertilizer is sold at a profit and benefits the nutrition of children in countries such as Canada and New Zealand. Meanwhile, the rightful owners of the resource, including Saharawi children, face poor food security in refugee camps. The injustice of this situation could not be more apparent.”

From the outset of shipments for the company into the Port of Vancouver in the second half of 2013, Polisario has attempted to engage Agrium, routinely protesting individual shipments and in 2016 rejecting an inadequate human rights evaluation, done at request of the company, as failing to explain the essentials facts of occupation and serious human rights abuses in that part of Western Sahara held by Morocco.

However, Agrium has never responded to the question of local consent. The same silence has been observed from Ultrabulk, which has been approached over the last years by the Danish organisation Afrika Kontakt.

“A basic starting point to thinking about Western Sahara”, remarked Khadad, “is the conclusion of the International Court of Justice in 1975 that Morocco does not have ‘any’ territorial right or claim to Western Sahara. Then add to this the pronouncement of the UN General Assembly that the territory is occupied. There’s nothing complex about territorial annexation and a selling of what is stolen property – in the face of our repeated constant protests – out the front door of our house. After years of calling for an end to this trade and seeking creation of United Nations oversight of our resources until its commitment to provide a referendum of self-determination of the Saharawi people is fulfilled, it was time to resort to the rule of law in the international order.”

He told the legal steps are "part of ongoing measures to seek justice against in the illegal exploitation of the natural resources of Western Sahara and enhance the rule of law in the advancement of self-determination for the Saharawi people.”

The detention of the two vessels, that in South Africa on May 1 and in Panama on May 17 local time, follows a case brought for the Saharawi people in the Court of Justice of the European Union. The case, with an appeal issued by the full court, concluded that Morocco had no territorial rights or claim in Western Sahara, and that a European Union free trade agreement could not be extended to operate in the territory. The court particularly noted that the consent of the Saharawi people was needed for trade or other agreements concerning such things as natural resources.

Polisario announced in a press release today that it will proceed with legal steps against "all the conspirators in the illegal trade of resources of Western Sahara and would pursue individual ship owners for future cargoes, including later civil claims against them in specific countries where port calls are made."

Click on image on the pictures below for a high resolution version (approx 2 Mb).

Pictures below can be used freely, if crediting the photographer Rick Voice. The images were taken as Ultra Innovation visited Vancouver harbour on 13 May 2016. 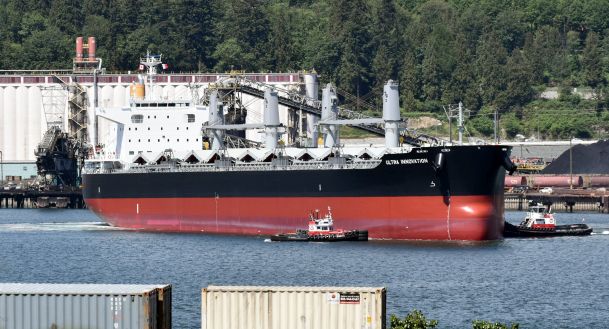 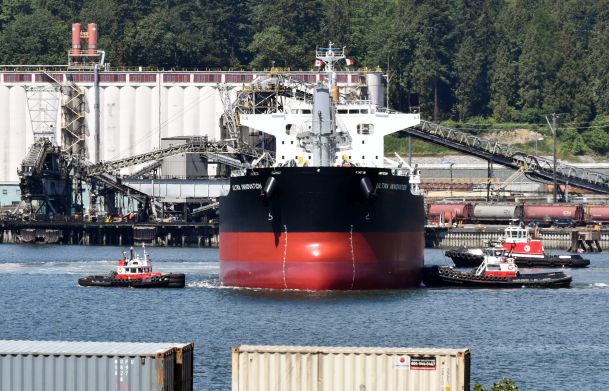 The day after Danish parliament urged all companies to stay away from occupied Western Sahara, a Danish vessel arrived Canada with phosphates rock taken from the territory.
19 June 2016