Support us
HR activist speaks out against the controversial green energy 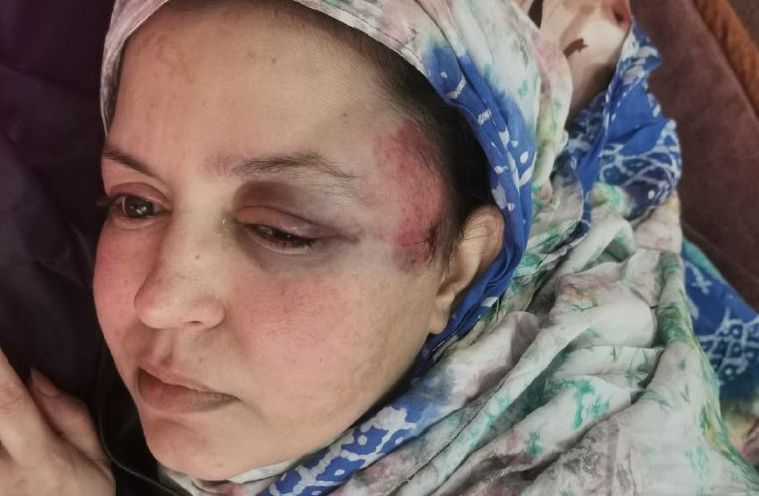 Picture: Sultana Khaya has been repeatedly attacked by Moroccan police. This picture is from 2021, when police hit her left eye with a stone. Her right eye is already lost since 2007.

Saharawi human rights defender Sultana Khaya reacts strongly to the international companies' investments for the Moroccan government in her occupied homeland, Western Sahara. In an interview with a Saharawi media outlet, made over the phone from her home, where she is under house arrest by the Moroccan government, speaks specifically out against the Italian company Enel and the Spanish-German Siemens.

Khaya is the President of the League for the Defense of Human Rights and against Plunder of Natural Resources in Boujdour. Sultana has become an important symbol for the Saharawi people's struggle for self-determination:

Khaya's predicament was highlighted in statements issued by the UN special rapporteur on the situation of human rights defenders in July and December 2021.

To no avail: a contingent of law enforcement officials continues to be stationed outside the house, without any legal explanation for their presence. In recent weeks, police officers have reportedly tried to cement the frontdoor of the Khaya house.

In spite of such hardship, Khaya does not remain silent. She is often spotted on the rooftop of her house, waving the flag of the Western Sahara Republic. In a recent interview on phone with the Saharawi citizens' journalism collective Equipe Média, Khaya lashed out against Morocco's plunder of her occupied homeland and the role of private companies therein - with particular reference to the renewable energy projects that Morocco is rolling out in the territory, without the consent of the people of Western Sahara.

"The prohibition that I have been living for more than a year going out of my house is anecdotal. This is a proof of Morocco's impotence in the face of the right to justice that I defend.

What is important to me and what I would affirm very clearly that actions must be taken to stop the plundering of the renewable or non-renewable natural resources of my country, Western Sahara.

The profits serve economically and politically for the occupation and its repressive measures.

7 kilometers from Boujdour where I live, the Moroccan occupier is building a 300 MW energy production park with wind turbines. The interlocutors are the Moroccan government and not that of Western Sahara.

The builders are the Moroccan group Nareva Holding, the German company Siemens and the Italian Enel Green Power. The shipping company transporting the wind turbine components is the German Briese Schiffahrts.

This wind farm is being installed without the consultation or consent of our people. And we disagree.

The foreign companies who are here, as elsewhere in Western Sahara, engaged in a project which, by betraying the ecological virtues of the production of energy from renewable sources, only complicates our access to the inevitable independence of our country.

Europeans, especially the French, Germans and Spaniards, must respect the decisions of European and international justice, and leave our country.

The plunder of Western Sahara by Morocco and its accomplices must stop so that the independence of our country can come about, and our free future can be built."

In October 2021, WSRW published a report exposing all of Morocco's existing and planned renewable energy projects in occupied Western Sahara. That report, "Greenwashing Occupation", had estimated that energy produced from wind in the territory could constitute 47.20% of Morocco's total wind capacity by 2030. However, shortly after the report's publication, the news emerged that the energy firm of Morocco's prime Minister was planning to build yet another wind farm in the territory, potentially raising Western Sahara's share in Morocco's total wind energy production to 52.25% by 2030.

For well over a decade, Sultana Khaya has been an outspoken activist for the right of self-determination for the Saharawi people. She has been repeatedly harassed by Moroccan authorities and lost an eye when attacked by a police officer in 2007. Before her house arrest, Khaya participated regularly in demonstrations advocating for self-determination and denouncing violence against Saharawi women.