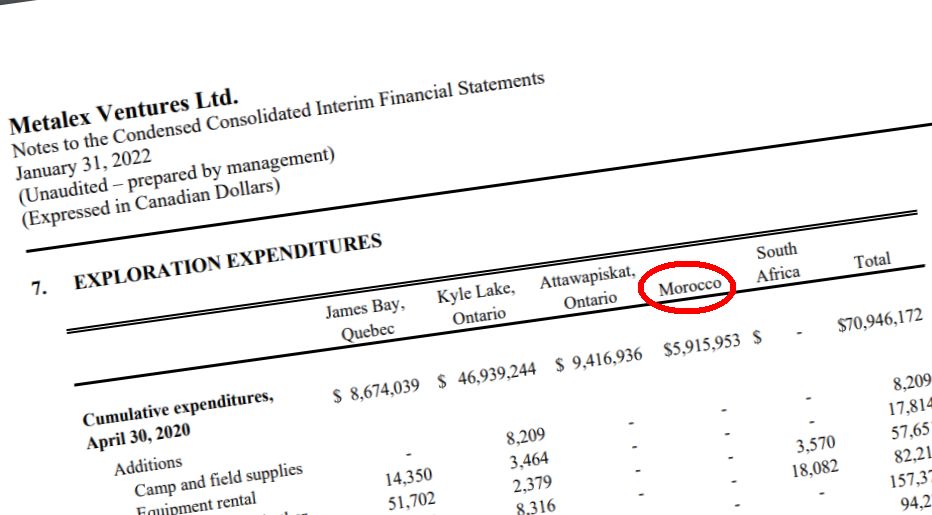 Accounts recently submitted to the Canadian government confirm that Metalex is on its way back to working in occupied Western Sahara.

For 6 years, the work of the small Canadian mining company Metalex in occupied Western Sahara was on hold. But recent information from the company confirms that its controversial partnership with the Moroccan government's mining authorities in the territory that Morocco holds under military occupation could be picking up speed.

A financial statement submitted by Metalex to the Canadian government for the nine months period that ended on 31 January 2022, shows that the company had 6740 Canadian dollars in expenses for “Shipping, freight and storage” in relation to their project in - what the company refers to as - “Morocco”. Although that amount is not particularly large, it shows that the work could take up again. The statement was filed on 18 March 2022.

Similarly, an interim financial statement submitted on 21 December 2021, for the six month period that ended on 31 October, shows a 2699 dollars expense for the same project and same type of cost.

Western Sahara Resource Watch (WSRW) wrote in July 2021 that the company's reports suggested that the controversial operations might be reaching a new stage. Metalex' financial reporting from this year points in that same direction.

It's been a long time since the company last reported expenses in relation to its operation in the occupied territory. The last project costs that the company filed were 53,000 Canadian dollars in “laborary analysis” during the financial year ending in April 2017.

There is no new development regarding the erroneous way in which the company is reporting on the geographical location of its licence. The market in Canada is thus misled into believing that the operation is in Morocco, which is not the case. This false reporting is made both in reports to the Canadian government and on the company's website.

“Metalex signed exploration licences in the occupied territory with the wrong government. As Morocco has no sovereignty over Western Sahara, nor any international mandate that warrants its presence there, the agreements must logically be legally null and void. In addition to the severe harm that the company is causing to the people of the territory by its partnership with the occupying government, investors in Canada should also be concerned by the misinformation shown in the company reports”, stated Erik Hagen of Western Sahara Resource Watch.

“The company's approach and actions are clearly an insult to the Saharawi people, and a slap in the face to those who stand up for the basic principles of international law”, he said.

Morocco's exploration of minerals in the territory it holds under occupation takes place in violation of international law, as the people of the territory have not expressed their consent to it.

Metalex is hoping to find kimberlite-hosted diamonds in the occupied territory, as well as commercial deposits of gold, base and precious metals, platinum groups metal and iron ore.

Uranium, diamonds, gold, niobium. ONHYM\'s mining programme in southern parts of occupied Western Sahara is speeding up. See where their projects are here.