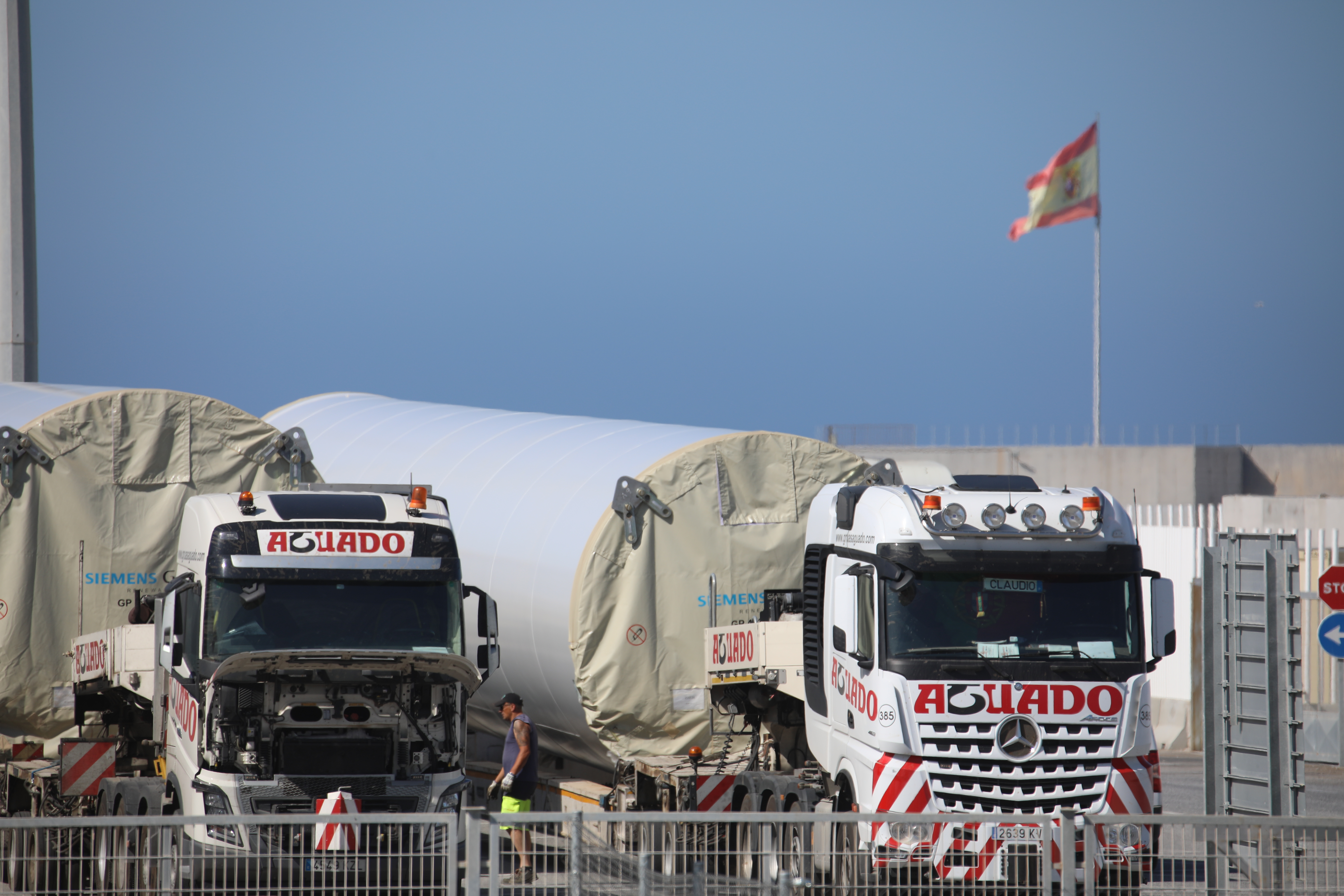 In a press release of 6 July, Western Sahara's liberation movement “condemns in the strongest possible terms” Siemens Gamesa’s involvement and this week's exports into the occupied territory.

Western Sahara Resource Watch has received a press release issued by Frente Polisario on the evening of 6 July 2021, strongly condemning the involvement of Siemens Gamesa in the Western Sahara conflict. The release comes as a response to this week's exports of masts from southern Spain.

The cargo vessel Johannes has again departed Motril port at 01:22 in the morning of 07 July 2021, after spending just over 24 hours in port, loading. Johannes' sister vessel the Aramis is expected to arrive tonight, 7 July at 21:00, in Motril to pick up further cargo.

According to reliable sources, Siemens Gamesa is loading windmill masts on board a cargo vessel in the port of Motril, Spain, to be exported to the port of El Aaiun, occupied Western Sahara. These materials are destined to the construction of a wind farm in Bojador, operated by Enel Green Power and Nareva. A similar cargo is planned for tomorrow.

As the legitimate and sole representative of the Saharawi people, the POLISARIO Front condemns in the strongest possible terms, Siemens Gamesa’s involvement in the illegal construction of a so-called “wind farm” in occupied Boujdour.

Back in 1975, the International Court of Justice confirmed that there has never existed any tie of territorial sovereignty of Morocco over Western Sahara. Since 2016, the Court of Justice of the European Union has firmly ruled that, according to the right to self-determination of the Sahrawi people, Western Sahara has a separate and distinct status from Morocco. Therefore, any economic activity undertaken in Western Sahara must receive the consent of Sahrawi people, legally represented by the POLISARIO Front, regardless the alleged benefits.

Contrary to that, provided that Morocco holds no sovereignty over Western Sahara, neither in the past nor in the future, any authorization issued by the Moroccan authorities in this regard is legally void. By formalizing contracts with the Moroccan occupying forces that hold no legal power over the territory, European companies such as Siemens Gamesa operate in a legal vacuum, reinforcing illegal occupation of Western Sahara territory. Such investments only serve illegal settlement policy by Morocco, making them become accomplices of a war crime according the Rome Statute.

Mr. Oubi Bouchraya, member of the National Secretariat of the Polisario Front, in charge of Europe and the European Union, declared: «The Saharawi people never accepted the exports of Siemens Gamesa to Western Sahara, nor to the so-called «wind farm» of occupied Boujdour. In the absence of a valid authorization which can only be granted by Saharawi authorities, the operation of Siemens Gamesa is clearly illegal. These reckless acts, contrary to the law, demonstrate Siemens Gamesa’s lack of understanding of the current dynamics on the ground. While the Saharawi Liberation Army is currently at war with the Moroccan occupation forces, the EU courts are expected to issue new decisions in September, in line with the ECJ’s previous jurisprudence.

In this context, the actions of Siemens Gamesa are short-sighted and can only lead, as in the past, to irresponsible and irrational decisions. This company is betting on the wrong horse with no exit strategy. We strongly advise it and other foreign companies to stay away from occupied Western Sahara. In any case, the Polisario Front is determined to pursue its fight to guarantee the sovereign rights of the Saharawi people by all legal means».