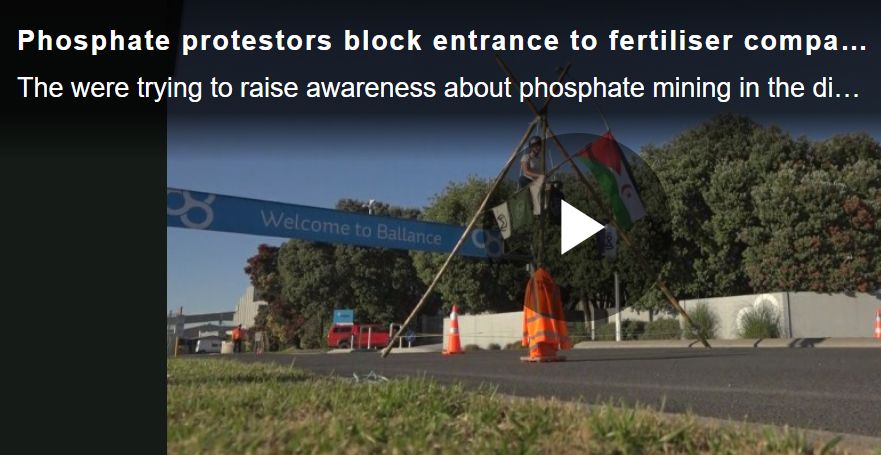 The entry gates to factories of Ravensdown and Ballance Agri-Nutrients around New Zealand were today blocked by pro-Saharawi actitivists denouncing the imports of conflict minerals from occupied Western Sahara.

The stunt has received large media attention in New Zealand, such as in TVNZ,  Otago Daily Times, Stuff and Sunlive.

In Tauranga, activists built tripods and locked on to the gates of the Ballance plant, shutting down the operation. At least one demonstrator was arrested. In Masteron. activists locked on to the gates of the Ravensdown plant, shutting down all operations. Also here, one person was arrested. In Dunedin. activists shut down the Ballance depot at Taieri. Police have attended and threatened arrest. In Christchurch activists delivered a protest letter to the main office of Ravensdown, and blockaded the main entrance of the building.

Western Sahara is the last colony in Africa, still to complete the process of self-determination. Last Friday, 13 November 2020, the three-decade old ceasefire agreement between occupying power Morocco and the liberation movement Polisario, collapsed after Moroccan troops violently intervened in a Saharawi protest that took place in the so-called Buffer Strip, where military presence is strictly prohibited. The Saharawi Liberation Army retaliated by attacking Moroccan military posts stationed along the Berm - a 2700km military fortified wall erected by Morocco, effectively dividing the territory. Yesterday, Moroccan armed forces responded in line with Rabat’s decision to not “tolerate any provocation of this kind”. Today, Western Sahara is once again the scene of war.

Saharawis have for years asked Ravensdown and Ballance to end the imports from their occupied homeland, which they perceive as funding and legitimising an illegal occupation. The companies have continued their purchases regardlessly.

Ravensdown and Ballance's imports go against the advise of the New Zealand government, which has urged the companies to look into importing from other sources. Earlier this year, the Minister of Foreign Affairs of New Zealand wrote that "the New Zealand Government has consistently made it clear to companies importing from Western Sahara that they must comply with international law, seek independent legal advice, and that they import at their own risk."

The Minister continued that "The Government has also requested that the fertiliser industry actively research the viability of alternative sources of phosphate that will meet the specific requirements of New Zealand pasture. Unfortunately, so far no viable alternative has been forthcoming but it is the Government’s expectation that efforts to find an alternative source will be ongoing."