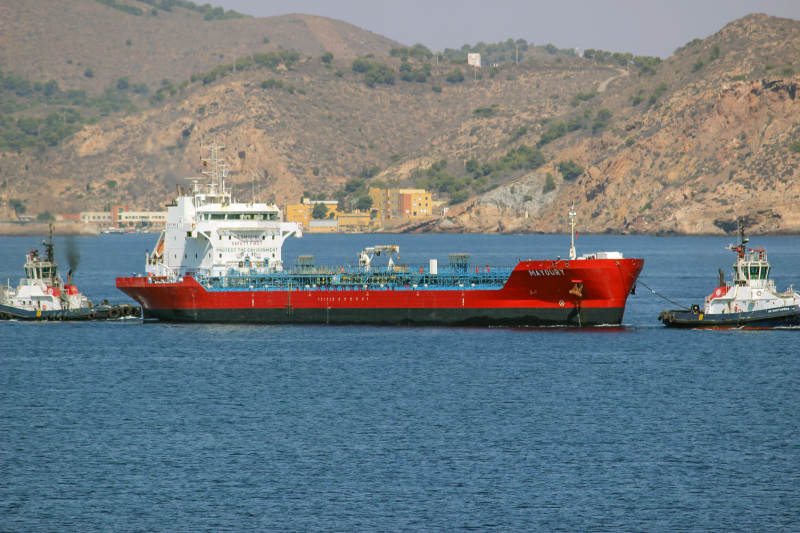 Picture: The French tanker Mayoury observed in the port of Cartagena, Spain, on 18 August 2021. That day, the ship picked up a cargo of petroleum at Repsol's refinery, for transports to both Dakhla and El Aaiún in occupied Western Sahara.

The two Spanish oil companies Cepsa and Repsol keep sending petroleum products into Western Sahara from their refineries in Spain.

An overview that Western Sahara Resource Watch (WSRW) has made of such shipments into the territory, reveals that nearly all of the products come from the two companies' terminals in Spain.

Around half a million tonnes of petroleum products arrived in occupied Western Sahara during the calendar year of 2021.

The calculation for that amount is based on the travel routes of 26 different vessels that are highly likely to have transported such cargo into the territory during that year. The vessels stopped a total of 86 times in El Aaiún and 68 times in the port or anchorage area of Dakhla. Some of the import incidents included calls to both two ports. At least 133 of the 154 shipments into the territory came directly from one of the two companies' terminals in Spain.

The total quantity of oil transported into occupied Western Sahara during 2021 is estimated at 471.507 tonnes. The calculation is based on the size of each vessel and its shipment route. In addition, the changes in draught have been taken into account. A draught explains the distance from the waterline down to the bottom of the vessel, and changes in this distance explain a vessel’s discharging or loading.

WSRW has asked Cepsa to comment on the shipments in a letter on 21 February. The company responded that “we supply hydrocarbons for distribution in the Saharawi territory, which are fully permitted”. The company noted to WSRW that “we are not commenting further”, when asked which country's laws and institutions they referred to. WSRW has also written to Cepsa in 2014, 2017 and 2018. A short response from the company on 8 November 2018 failed to respond to the questions asked to that point.

WSRW wrote to Repsol on 21 February 2022. The letter was not responded to.

The volume of petroleum products shipped into Western Sahara in 2021 is similar to the one that WSRW observed for the year 2020, but lower from the one that WSRW reported for 2019. The reason for the decrease from 2019 to 2020 can potentially be attributed to far more conservative WSRW methodology for calculating cargo onboard the vessels, applied from the year 2020 onwards.

Turning to the involved shipping companies involved, two companies stick out as being more  implicated than others:

The article continues under the table.

It is possible that the overview is not complete, and that certain arrivals have escaped WSRW’s attention.

Cepsa has been behind the largest transports, from its refineries in Algeciras, Carteya Guadarranque, Huelva, Tenerife, whereas Repsol has shipped from the port of Cartagena. It is not yet known to WSRW which company is behind the exports from Las Palmas to Western Sahara.

In addition to transports from Cepsa's and Repsol's refineries in Spain, there were also possible exports from the French ports of Fos-sur-Mer and Berre, as well as from Jorf Lasfar (Morocco), Agadir (Morocco), Nouadhibou (Mauritania) and Nouakchott (Mauritania).

It can also be noted that two tankers that were previously very actively involved are no longer taking part in the trade from 2021:

WSRW has made a similar overview of petroleum exports for the calendar years 2020 and 2019.

The Swedish shipping company Wisby Tankers continues its transports of petroleum products into the occupied territory of Western Sahara at same level as earlier, but a new vessel has started on the route.
12 June 2017