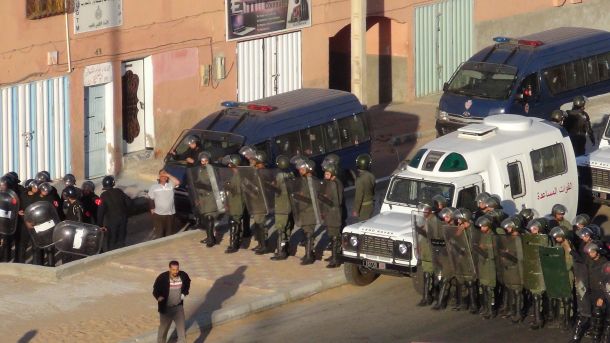 On 4 May, Western Sahara Resource Watch (WSRW) published an article outlining all transports of liquified gas into Western Sahara. Since then, both Equinor and Borealis have announced they do not want to take part in such trade again, while a third company redirected a shipment to avoid Western Sahara involvement.

WSRW today presents an overview of all shipments of petroleum products that have arrived in Western Sahara last year.

The transport of petroleum/oil tankers into Western Sahara harbours took place on 160 occasions: 81 times the tankers called in at the port of El Aaiún and 79 times in Dakhla. Some of the vessels called at two of these ports during the same journey, while others only delivered to one port. Some of the transports fuelled other vessels – mostly so-called reefer vessels - just off the port of Dahkla, without ever entering Dakhla harbour.

The total quantity of refined petroleum products arriving at the two ports is estimated at 757,500 tonnes. The calculation is based on the size of each vessel and its shipment route. In addition, the changes in draught have been taken into account. A draught explains the distance from the waterline down to the bottom of the vessel, and changes in this distance explain a vessel’s discarding or loading.

Article continues under the table.

It is possible that the overview is not complete, and that certain arrivals have escaped WSRW’s attention.

The value of the imported products could be around 375 million USD, which is a very rough estimation. This value is calculated on the basis of the 2019 average price of 65,7 USD per barrel of refined petroleum, as recorded on Indexmundi prices of Brent/WTI/Dubai petroleum.

The known points for picking up the cargoes are in the Spanish ports of Carteya, Palmones, Cartegena, Ceuta, Las Palmas, Tenerife, Huelva and Tarragona. All ports are associated with refineries of the Spanish company Cepsa, while one port (Cartagena) is most likely associated to Repsol. WSRW wrote Cepsa in 2014 and in 2017, and 30 October 2018. A short response from the company on 8 November 2018 to our latest letter fails to respond to the questions asked in 2014 and 2017.

Wisby Tankers from Sweden remains the most heavily involved shipping company in the trade.

"Wisby Tankers should immediately halt this dirty business. Their activities directly contribute to prolonging the suffering of the Saharawi people. The company should follow the example of the multinational companies that have exited this trade over the course of the last months", Emmaus Stockholm wrote in Swedish newspaper Dagens ETC today.

Wisby Tankers' two Norway-flagged vessels Wisby Argan and Wisby Cedar shipped 21,6 % of the petroleum products. A representative of Wisby Tankers, Mr. Johan Markström explained to Swedish national TV in 2014 that the company "in no way is politically active". Wisby Tankers has registered the ships in the Norwegian International Ship Register through the Norwegian company M Hannestad. A spokesman from the company, Mr. Lacho Iliev, defended the role of his company to Norwegian daily Halden Arbeiderblad on 24 May 2020. The Norwegian Support Committee for Western Sahara wrote a letter to M Hannestad on 31 December 2016. The letter was not responded to. Nor were the 20 follow-up requests in 2017, 2018, 2019 and 2020.

The French flagged vessel Mayoury transported 20,8 %. Together with the French association APSO, WSRW wrote Sogestran on 27 April 2020. The company has not responded. The Moroccan flagged Imrikly transported 10%. A fleet of Italian ships transported 6% of the cargo.