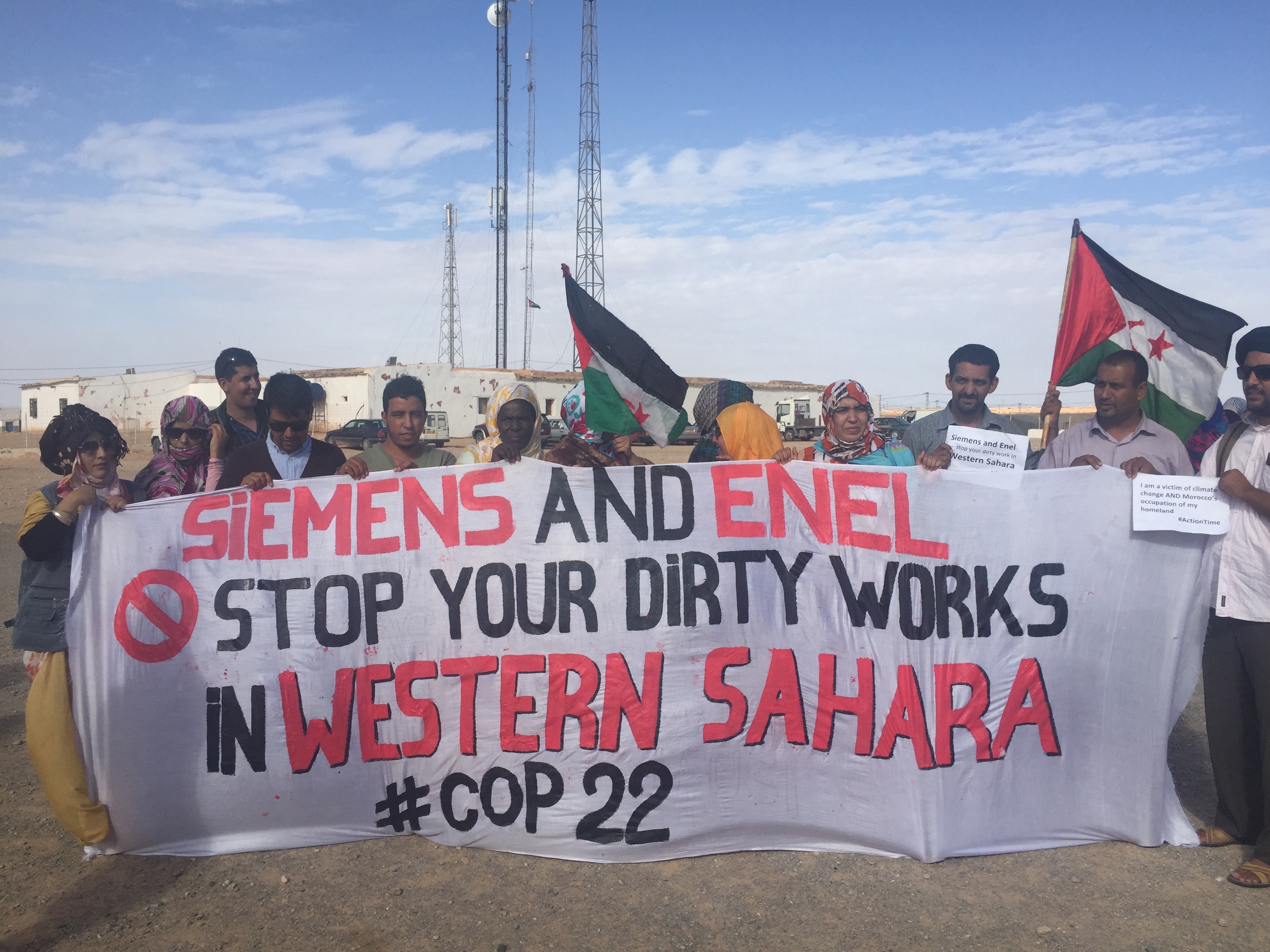 Picture above: Saharawi refugees protest against Enel and Siemens' plans to construct wind farms in their occupied homeland.

"The policy of the Enel Group is to not assume any position on political issues. We are therefore unable to answer questions related to topics such as territorial sovereignty", Enel stated at its shareholder meeting in Rome yesterday, in reply to questions about the legality and ethics of it's involvement in the construction of wind parks in occupied Western Sahara.

The company told that "in relation to projects located in Western Sahara, it is stated that no negotiations have yet been set up. It should be noted that Enel Green Power carries out its business, including investments, in full compliance with the applicable legislation".

Enel did not elaborate on what the applicable legislation in Western Sahara would be.

Western Sahara has been largely occupied by Morocco since 1975, which has no legal title vis-à-vis the territory. This was affirmed by a Ruling by the Supreme Court of the European Union of 21 December 2016, which stipulated that since Western Sahara is not part of Morocco, no EU trade or association arrangement with Morocco could be applied to the territory. The court concluded that Western Sahara should, in such a context, be regarded as a third state, whose people ought to explicitly express consent for any such arrangement to affect their homeland.

"It is really unfortunate that a company like Enel, that has always shown sensitivity on the subject of renewable energies, has chosen to develop such important projects right in a territory, that the UN defines as a non-self-governing territory under foreign belligerent occupation. Enel is risking to undermine the UN peace process", said Fabio Castaldo, European Parliamentarian of Italy's 5 Star Movement (Movimento 5 Stelle).

"A solution can only be found with the consent of the people of Western Sahara, in full compliance with the principles established by ECJ ruling "Council v Front Polisario" of 21 December 2016", Castaldo added.

In March 2016, Enel announced to have won a tender by the Moroccan government, in consortia with Siemens and the Moroccan king's company NAREVA, for the construction of five winds parks in "Morocco". But two of the five parks in the package deal are in fact located in occupied Western Sahara.

“We deplore that Enel’s responses to legitimate and serious questions were so void of substance. It would appear that Enel does not take the matter seriously, which reveals corporate greed rather than corporate responsibility", says Anna Lucia Angelillo from Western Sahara Resource Watch in Italy.

"It is unfathomable that Enel would consider itself a non-political actor, when it chooses to do business with an occupying power in a territory that is known as a human rights black spot. Enel has even partnered with a firm owned by the Moroccan monarchy - the driving force behind the continued occupation of the territory. Hardly a neutral stance", Angelillo stated.


The below questions by WSRW were put forward at the Enel shareholder meeting in Rome, 4 May 2017, by the Fondazione Culturale Responsabilità Etica. Enel's replies are added (translated into English by WSRW).

Q: What is the current status of the Boujdour and Tiskrad wind plants in Western Sahara?
A: In March 2016, the consortium formed between Enel Green Power, Nareva and Siemens was qualified as the preferred bidder and, therefore, provisionally awarded in the tender for the development, financing, construction, operation and maintenance of 5 wind projects, for a total installed capacity of 850MW (the tender). The tender was attended by the most important companies of the field (Edf, GDF Suez, Gamesa, etc).
The first of the tender projects that has to be realized is the Midelt windmill (140MW) located in the northeast of Morocco, near the city of Midelt. It should be noted that at this stage the agreement for the implementation of the project and the financial agreement between Enel Green Power, Nareva and ONEE is still under negotiation. The Midelt project is scheduled to start by the end of 2017.
Negotiations for the definition of contracts for other projects, including those located in Western Sahara, have not yet started.

Q: Could you clarify the legal grounds on which the company decided to sign a contract with Morocco, which includes the construction of two wind farms in Boujdour and Tiskrad, located outside the borders of that country?
A: In relation to projects located in Western Sahara, it is stated that no negotiations have yet been set up. It should be noted that Enel Green Power carries out its business, including investments, in full compliance with the applicable legislation.

Q: In line with the commitment for accuracy and veracity in its Code of Ethics, will Enel conform its public communication on its investment in Western Sahara, which incorrectly presents it as taking place in Morocco?
A: Enel Green Power plans and realizes the development of long-term projects, without speculative approach and in full compliance with the current legislation. Moreover, it pays particular attention to all aspects related to sustainability issues in each country in which it is present and, in accordance with the Group's shared value-building policy, places among its priority the construction of a structured dialogue with the various local communities.

Q: By investing in Western Sahara, Enel might be violating basic principles of international law by legitimising and contributing to Morocco's illegal occupation of the territory. How does the company justify such behaviour in light of international law?
A: The policy of the Enel Group is to not assume any position on political issues. We are therefore unable to answer questions related to topics such as territorial sovereignty. Regarding the possible investment of Enel Green Power, please refer to the previous statements.

Q: In its ruling Council vs. POLISARIO Front of 21st December 2016, the European Court of Justice clarifies that all economic activities carried out in the territory of Western Sahara need to have prior consent by the Sahrawi people, as expressed by their UN-recognised representative, the POLISARIO Front. Has the management assessed such implications? And does it intend to establish a dialogue with the POLISARIO Front, respecting point 3.27 of Enel’s code of Ethics, to establish institutional relations with all parties without any form of discrimination?
A: The aforementioned CJEU judgment refers to association and liberalization agreements concluded between the EU and the Kingdom of Morocco in 2012 in the agricultural and fisheries sectors. The same is therefore not applicable to the present case.

Q: Following the reasoning of the CJEU on the separate and distinct status of Western Sahara, do you think that Moroccan law can be the applicable law governing investments located in Western Sahara?
A: It is reaffirmed that Enel Green Power carries out its business, including investments, in full compliance with applicable legislation. With reference to the Western Sahara area, no specific agreement has been signed and has not yet been negotiated.

Q: Following the reasoning of the CJEU on the separate and distinct status of Western Sahara, do you think that Morocco has the authority, in its sovereign capacity, to issue tenders for investments located in Western Sahara?
A: The policy of the Enel Group is to not assume any position on political issues. We are therefore unable to answer questions related to topics such as territorial sovereignty.

Q: How could an employee or contractor engage in a legal or administrative proceeding in front of a European jurisdiction in relation to the investment in Western Sahara, since the European Court of Justice considers Moroccan contracts related to Western Sahara as invalid (Council vs POLISARIO ruling of 21 December 2016)?
A: The aforementioned CJEU judgment refers to an international agreement between states and is based on the international law concerning treaties contained in the Vienna Convention. The same is not applicable to this case.

2.10 We regret to see in the media that our partner Siemens is facing social contestation for their investments in Western Sahara and we fear that it will affect Enel’s reputation. Has the Management conducted any risk evaluation for the company’s reputation?
Enel constantly monitors the perception of the Group and its activities, in accordance with all the media, always expressing openly and transparently its positions to all the interlocutors.