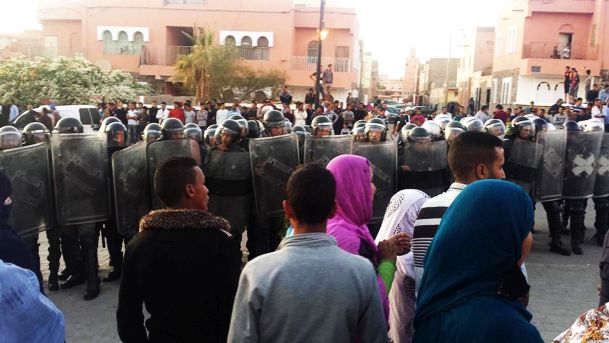 The French company ENGIE will build infrastructure in Western Sahara, and engaged consultancy firm Global Diligence to whitewash its operations with the occupying power.

French multinational electric utility firm ENGIE is about to build a desalination plant to be built near Dakhla, occupied Western Sahara. The company informed about this development in early January 2021, in response to a letter from Western Sahara Resource Watch (WSRW).

ENGIE stated to WSRW that it has retained consultancy firm Global Diligence to “consult all stakeholders involved” in relation to the project. However, neither ENGIE nor Global Diligence wish to shed light on the process that they have begun.

On 20 January 2021, Global Diligence invited WSRW for conversations. Three days later, on 23 January, Global Diligence sent further info, stating that they had begun “the initial phase of our preliminary stakeholder engagement process, which will focus on the intended and potential benefits of the desalination facility near Dakhla”. WSRW was essentially invited to assist “in identifying and engaging with a broad range of the Project’s intended and potential beneficiaries on an ongoing basis”. Global Diligence would encourage those ‘stakeholders’ to “engage with us [Global Diligence] in a spirit of realism and compromise”.

In a mail to Global Diligence on 3 February 2021, WSRW informed that it declined to take part in such a process as it fails to comply with the basic legal principles that apply to Western Sahara, namely that the territory is separate and distinct from Morocco, that Morocco has no legal mandate to administer the territory, and that the people of the territory have a right to self-determination. As stipulated by the EU Court of Justice and by several UN bodies, the people of Western Sahara have a right to consent. As far as WSRW can tell, they have never consented to ENGIE’s desalination project on behalf of the Moroccan government in their occupied land.

Global Diligence then responded on 15 February that it is not going to answer the questions sent by WSRW in relation to the alleged ‘stakeholder’ study on the occupied territory.

WSRW is deeply concerned about the French company's infrastructure project.

“Rather than asking the actual owners of the land for their permission to the project, ENGIE has struck a deal with the occupying government and now tries to conceal that highly unethical approach by resorting to a consultation of alleged ‘stakeholders’”, says Sara Eyckmans from Western Sahara Resource Watch. “It is worrisome that an organisation like Global Diligence allows itself to be used for that purpose.”

WSRW furthermore asked both Global Diligence and its client ENGIE to clarify and make public the purpose of the consultation, its terms of reference and timeline, the methodology for selecting ‘stakeholders’, as well as its assessment of the legal status of Morocco in the territory and the legal validity of ENGIE’s contract on occupied land signed with the neighbouring country of Morocco.

Global Diligence responded that it does not wish to answer any of those requests. ENGIE has to this date remained silent.

“These aspects are fundamentally important for the Saharawi people”, WSRW wrote in a letter to Global Diligence on 16 March 2021. “Therefore, we will henceforth proceed to publish our correspondence on our website, so that the public opinion in Europe and in Western Sahara can have access to information about the existence of the so-called ‘stakeholder engagement process’ initiated by ENGIE in relation to its controversial infrastructure signed with the occupying power of Morocco in Dakhla.”

Global Diligence is an international legal firm based in London and Paris. The company advertises itself as experts on human rights and “complex legal issues in unstable and conflict-affected regions”. Their website has a segment dedicated to the self-determination, though only applied in contexts of separatist conflicts and indigenous rights in recognised states – which is different from the right to self-determination of a colonised people.

“As well established by the International Court of Justice, Western Sahara was never part of Morocco in the first place”, Eyckmans continues. “It is remarkable that Global Diligence adopts a misrepresentation of basic facts that we’re used to seeing from companies that seek to make a profit in the occupied territory through a deal with Morocco, thereby sidelining the people who have the sovereign right to decide the status of the land and its resources. More so, as they seem to argue the exact opposite in other cases”.

Global Diligence has worked extensively on the situation in occupied Crimea. In 2019, Global Diligence partnered with the Ukrainian Helsinki Human Rights Union on an important submission to the Office of the Prosecutor of the International Criminal Court. Global Diligence refers to the Crimean peninsula as being “annexed” by Russia and demands of the ICC an examination “of war crimes and crimes against humanity committed at eastern Ukraine” and “a full investigation of the case since the Russian Federation continues its aggressive actions towards Ukraine”. “Of utmost importance is to stop this 5 year-long impunity of the aggressor state”, Global Diligence emphasizes.

Global Diligence does not wish, however, to explain how it views the legal status of Western Sahara or of Morocco's presence in the territory.

ENGIE was accorded a contract for the desalination plant by the Moroccan government in December 2018, after winning a tender process in which the firm had joined forces with Nareva, a Moroccan energy company that is wholly owned by the king of Morocco. As reported by Moroccan media, the facility is expected to mainly benefit the agri-industry near Dakhla: huge plantations that are either owned by French-Moroccan conglomerates or the King of Morocco himself, and that are at present depleting the finite underground water reserves of the area.

The construction of the wind-powered desalination plant comes with a price tag of nearly 2 billion Moroccan Dirham. The mega-project, aimed at irrigating 5,00 hectares of farmland, was announced in 2016. The Moroccan Ministry of Agriculture has commissioned the Engie-Nareva consortium to co-finance, design, built, maintain, manage and operate the desalination plant and connected irrigation infrastructure.

The desalination plant and 40 MW wind farm will be implemented by a joint venture of the companies Nareva Renouvables SA and International Power SA.

ENGIE is reportedly also involved on a number of other projects in the occupied part of Western Sahara.