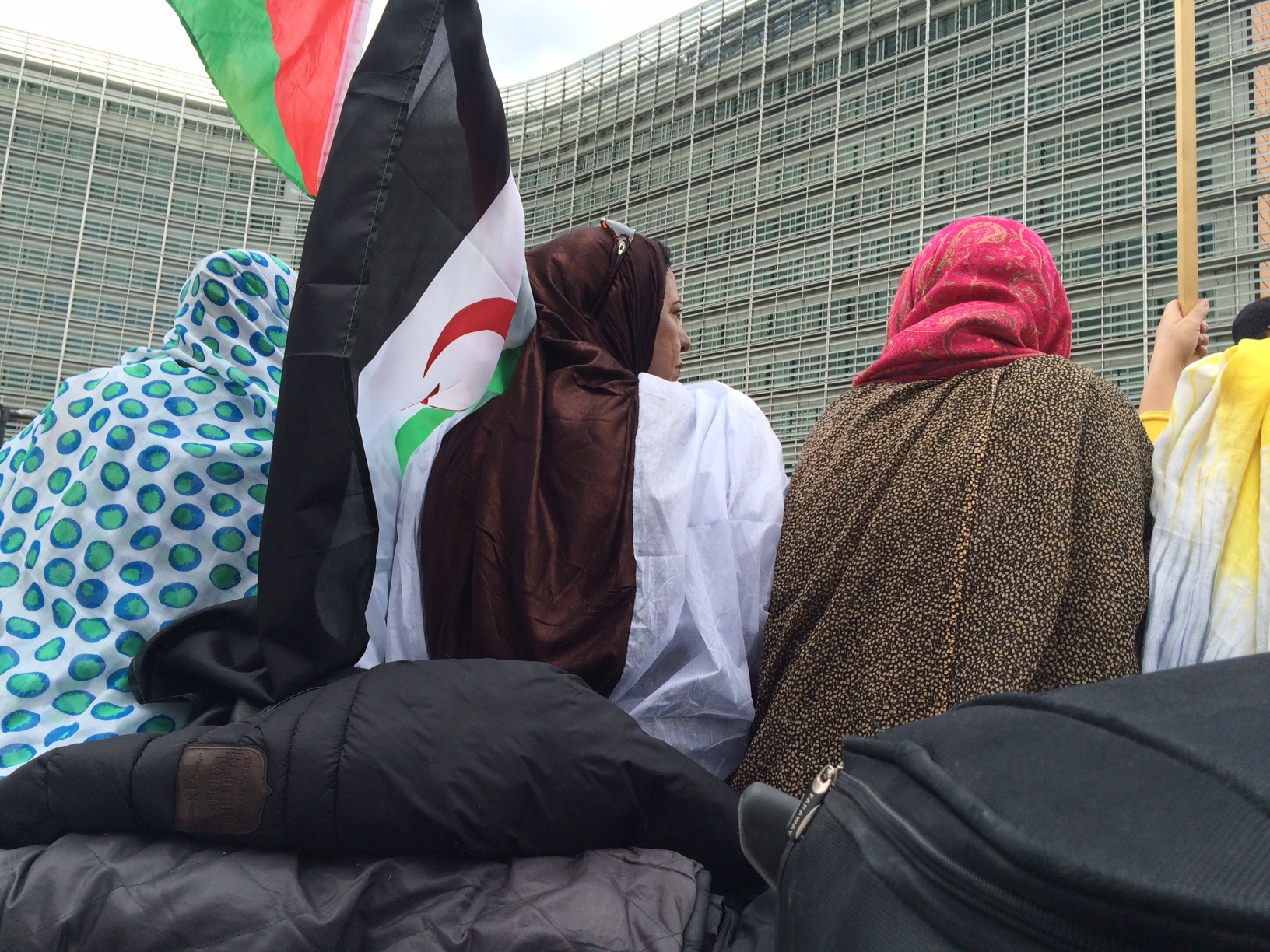 While the EU Court of Justice's verdict on the legality of applying the EU-Morocco trade deal to occupied Western Sahara is only weeks away, the EU Commission plans to visit the territory to assess the deal's impact.

Above: When Saharawis protest the inclusion of their occupied homeland in EU-Morocco trade agreements, the EU Commission interprets it as a consultation exercise. Now, the Commission is planning a mission to the territory without Saharawi consent. WSRW is concerned that voice opposing the trade arangement in Western Sahara will again be misused.

UPDATE, 16.07.2021: Polisario has issued a press release regarding the EU delegation in which it "denounces the harmful and irresponsible behavior of the European Commission."

Yesterday, 13 July 2021, the EU Parliament's Committee for International Trade (INTA) held “an exchange of views on the state of the EU-Moroccan trade relations and developments”, as described in the Committee's agenda.

During the exchange, the EU Commission told the INTA Committee that it is working on a report on the impact of applying the EU-Morocco trade agreement to Western Sahara. The data for that report is provided by Morocco, and will be complemented by a visit of the Commission to Western Sahara before the end of this summer, said Mr Fernando Perreau de Pinninck of the Directorate-General for Taxation. He added that the 2020 imports of products from Western Sahara had increased by 12% as compared to 2019. “So we can say that Western Sahara is benefitting from the agreement”, he concluded. Read a transcript of Mr Perreau de Pinninck's introductory statement below.

After questions from Members of Parliament (MEPs, Mr Perreau de Pinninck clarified that the report is expected in the autumn, and that the visit is “limited to the implementation of the agreement with Western Sahara”. He announced that meetings with civil society and operators are planned.

The EU Commission did not mention that the legality of extending this very agreement into Western Sahara is currently being reviewed by the EU Court of Justice (CJEU), and that a ruling is expected in September - possibly even before the Commission's visit to the territory.

“It is remarkable that to this day, the EU Commission continues to argue in terms of presumed benefits of this approach to Western Sahara, knowing fully well that the people of the territory are firmly opposed to the deal - even to the extent of taking the matter to Court”, says Sara Eyckmans of Western Sahara Resource Watch. “The fact that the Commission choses to travel into the territory in coordination with Morocco, without even speaking to the representation of the people of the territory, shows that the concept of self-determination and consent is still not understood”.

Western Sahara Resource Watch has documented that all letters of condemnation from Saharawi civil society have been used by the EU Commission as a sign of support to the EU-Morocco trade in the territory. The Commission's misuse of the Saharawi protests can be found in the 2020 WSRW report 'Above the Law.'

“Based on the EU Commission's history of cynically spinning Saharawi opposition to EU trade in Western Sahara in their favour, WSRW is concerned that this meaningless mission will have the same purpose: fabricating a sales' pitch out of legitimate protest”, Eyckmans stated.

During yesterday's hearing, several MEPs addressed the worrisome human rights situation in Western Sahara and in Morocco proper. Saskia Bricmont (Belgium,Greens/EFA) asked the Commission to clarify how it uses the agreement's human rights clause in its dialogue with Morocco - but received no response. The MEP's question regarding correct labelling of origin of products from Western Sahara was stonewalled with a quick sentence that this is not an import issue, but a matter for internal market authorities.

Many MEPs - in particular from Spain - raised the negative impact of the agreement on EU tomato producers, as also lamented in a letter that the sector of EU tomato producers sent to the EU Commission in June this year. In it, major agricultural associations ask the Commission to take action on behalf of EU producers, who reportedly face unfair competition from farmers in Morocco and Western Sahara, and call for labelling and control of the Western Sahara produce. The EU Commission responded that they are not contemplating any changes to the current practice.

"I will say a few words on the implementation of the agreement that extends the tariff preferences to products of Western Sahara. And what I would like to say is that the agreement is now currently being monitored. And since the presentation of the report on the impact of the agreement, we consider it has been implemented normally: we are monitoring it regularly and there are no incidents reported by customs. We are not aware of any implementation issues raised by operators or by the customs of the Member States. We are working on the report of 2021 to assess the impact of the agreement, and Morocco has been providing information, as agreed, on trade in the main products, directly and through their database. And also we are compiling this information. We expect to complement it with a visit that the Commission services will conduct in the territories of Western Sahara, hopefully towards the end of the summer. With respect to the data of 2020 on trade on imports from Western Sahara, they are in line with trends identified in 2019. Exports of fruits and vegetables have increased in 2020 as compared to 2019 by 12%. Although in any case, these tomato imports always respect the quantities of the tariff rate quotas agreed with Morocco under the Association Agreement. Exports of fish products have increased by 12% in 2020. And the data for 2021 showed that for the first 4 months of the year, for which data are available, that the trends are very similar to those in 2020. The monthly average exports for tomatoes are a bit higher, 2.5%, but the exports of melons and fishery products are actually lower than in the average months of 2020. So we can say that Western Sahara is benefitting from the agreement, and I think that with that I will close here for the benefit of time."

In a move that surprised no one, the EU Council has appealed the recent EU Court of Justice stopping EU trade and fisheries in occupied Western Sahara. But Council was not unanimous. UPDATE 06.12.2021.