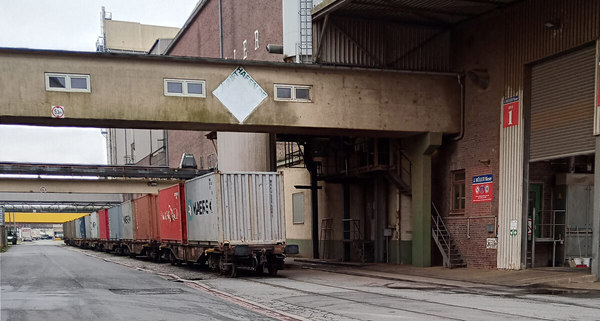 The German government has released data of trade with fishmeal from plants located in occupied Western Sahara that confirms figures previously released by authorities in Bremen.

Above: New data from German government confirms that fishmeal is not only transported in bulk cargo vessels to Bremen Holzhafen, but also arrives in containers. This container train was observed at the KMP factory in Bremen.

Over the course of the years 2017-2019, Germany imported 34,711 tonnes of fishmeal from Western Sahara, according to data released by the German government on 24 April.

The numbers correspond to data previously given by the government of Bremen. Western Sahara Resource Watch (WSRW) wrote in 2019 that Bremen had found the imports of fishmeal from January 2017 to August 2018 to be 22,026 tonnes. This means that the imports from August 2018 to December 2019 must have been the difference of 12.685 tonnes, which WSRW considers a realistic volume based on known shipments to Germany during the same period.

WSRW estimates that the total product value for the period 2017-2019 to be approximately 40 million Euros. The recently released trade figures from the German government came as a response to a written question by member of parliament Katja Keul (Bündnis 90/ die Grünen)

An analysis of the legal aspects of the conflict in Western Sahara has led the research department of the German parliament to conclude that there are substantiated violations of the Fourth Geneva Convention by Morocco, that is to be considered an occupying power of the non-self-governing territory.

Merchandise stemming from establishments located in Western Sahara are being imported into Europe as Moroccan goods. Consequently, imports from occupied Western Sahara do not show up as such in foreign trade statistics of Germany. Under EU regulations, fishery products must originate from companies that the EU has approved in separate lists in a special database for "Non-EU Countries Authorised Establishments". The European Court of Justice has decided that Western Sahara cannot be included in a trade agreement with Morocco. Inspite of this, the EU Commission keeps producing lists of Western Sahara companies on the list of approved establishments on the list of Morocco. See latest version of that list here.

The existing 11 processing plants located in occupied Western Sahara are listed under "Morocco" - inspite of the court rulings. The plants in Western Sahara make up 44% of the 28 companies included in the Moroccan list. All of which have been certified by Moroccan authorities.

The practice is highly questionable and contributes to uphold Morocco's illegal occupation.

“With this import regulation and also with the new EU-Morocco Trade and Fishery Agreement, the EU acts as an accomplice to the occupying power, Morocco. The EU violates international public law as well as its own jurisprudence, and complicates the UN's efforts to find a solution to the conflict", stated Hamdi Mohamed Salek of Western Sahara Resource Watch in Germany.

Based on the new data of the German government related to the data from the Federal Statistical Office for the import of fishmeal from Morocco, WSRW estimates that approximately 53% of fishmeal imported to Germany 2017-2019 labeled as Moroccan imports are from Western Sahara.

All imports from Western Sahara to Bremen have to be customs-checked by the Central Customs Office Bremen. This includes both the cargo arrived in bulk to Bremen, as well as containers - landed in the port of Bremerhaven.

Thus far, WSRW has only identified ships in Bremen, while container traffic has remained unidentified.

WSRW has over the last years documented the unloading of several cargos from El Aaiun at the terminal of the local importing company Köster Marine Protein (KMP). On its website, KMP claims to be the biggest distributor of fishmeal in Europe and that containers are being transported from Bremerhaven to their unit in Bremen. WSRW has contacted KMP on three occasions, but the company has never responded.

Polisario Front, the UN-recognized representative of the Saharawi people, urged KMP on 28 May 2020 to stop all imports of Western Saharan fishmeal.

Imports of fishmeal from occupied Western Sahara into Germany has been known since July 2018. So far, the local Bremen government has not contributed much to the clarification. The Bremen parliament and government have for a number of years shown wide support to the right to self-determination for the Saharawi people. An article published on 30 May 2020 in daily newspaper taz Nord pointed to the paradox that this support has not translated into taking action to stop the controversial trade.

A recent news report by the German broadcaster MDR, published 15 June 2020, sheds light on the controversial relationship between EU and Morocco in view of the Western Sahara conflict.

Has another cargo of fishmeal from Western Sahara arrived in Germany?

On Tuesday, a cargo vessel arrived at the port of Bremen with a new probable cargo of conflict meal.

The Bremen port authorities have now confirmed WSRW’s hypothesis that a shipment of fishmeal from Western Sahara arrived in Bremen (Germany) two weeks ago – though they erroneously locate the town of origin, El Aaiun, in “Morocco”.

The imports of fishmeal into Germany from occupied Western Sahara is a lot larger than what has been known to the public so far, according to fresh data from the Bremen government.

Fishmeal from occupied Western Sahara now being unloaded in Germany

A consignment of 3000 tonnes of fishmeal that was loaded in occupied Western Sahara is at present being unloaded in the port of Bremen, Germany. "How does this fit with the ECJ judgment on trade with Western Sahara?", WSRW asks.