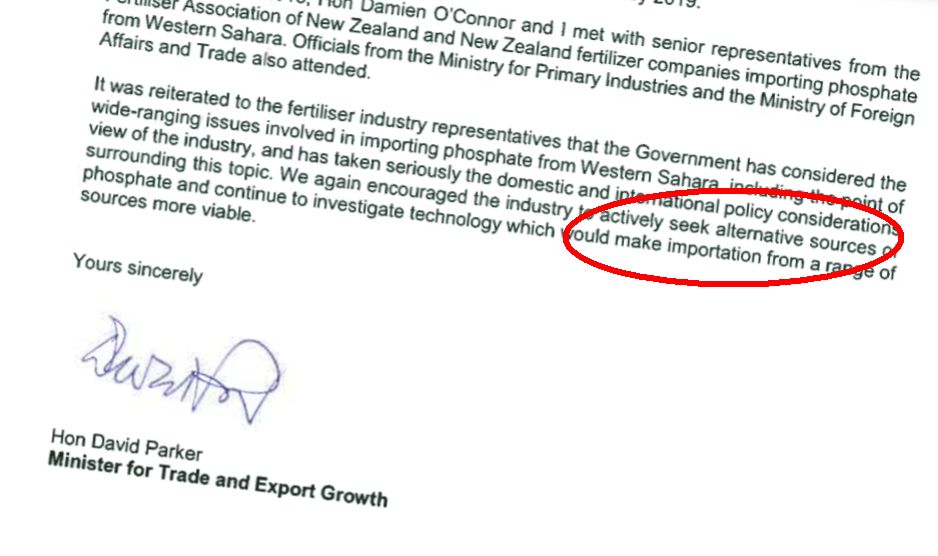 The Government of New Zealand has requested that the two local companies importing phosphate rock from Western Sahara source their raw materials from elsewhere than the occupied territory.

The government of New Zealand has asked its local fertilizer industry "to actively seek alternative sources of phosphate and continue to investigate technology which would make importation from a range of sources more viable."

This is explained in a letter sent by the Minister of Trade on David Parker, to the Western Sahara Campaign New Zealand on 6 February 2019. Find the letter here - which was sent as a response to emails to the government from the pro-Saharawi association on 29 November 2018 and 9 January 2019.

The government's clarification to the industry was given in a meeting with the Fertiliser Association of New Zealand, whose two members Ballance Agri-Nutrients and Ravensdown distribute 98% of the fertiliser in the country.

Those fertilizers are made from conflict minerals from occupied Western Sahara. Through this trade, New Zealand farmers are among the largest funders of the brutal and illegal Moroccan occupation of Western Sahara.

The full letter from the government reads:

"On 30 November 2018, Hon Damien O'Connor and I met with senior representatives from the Fertiliser Association of New Zealand and fertilizer companies importing phosphate from Western Sahara. Officials from the Ministry for Primary Industries and the Ministry of Foreign Affairs and Trade also attended.

It was reiterated to the fertiliser industri representatives that the Government has considered the wide-ranging issues involved in importing phosphate from Western Sahara, including th point of view of the industry, and has taken seriously the domestic and international policy considerations surrounding this topic. We again encouraged the industry to actively seek alternative sources of phosphate and continue to investigate technology which would make importation from a range of sources more viable."