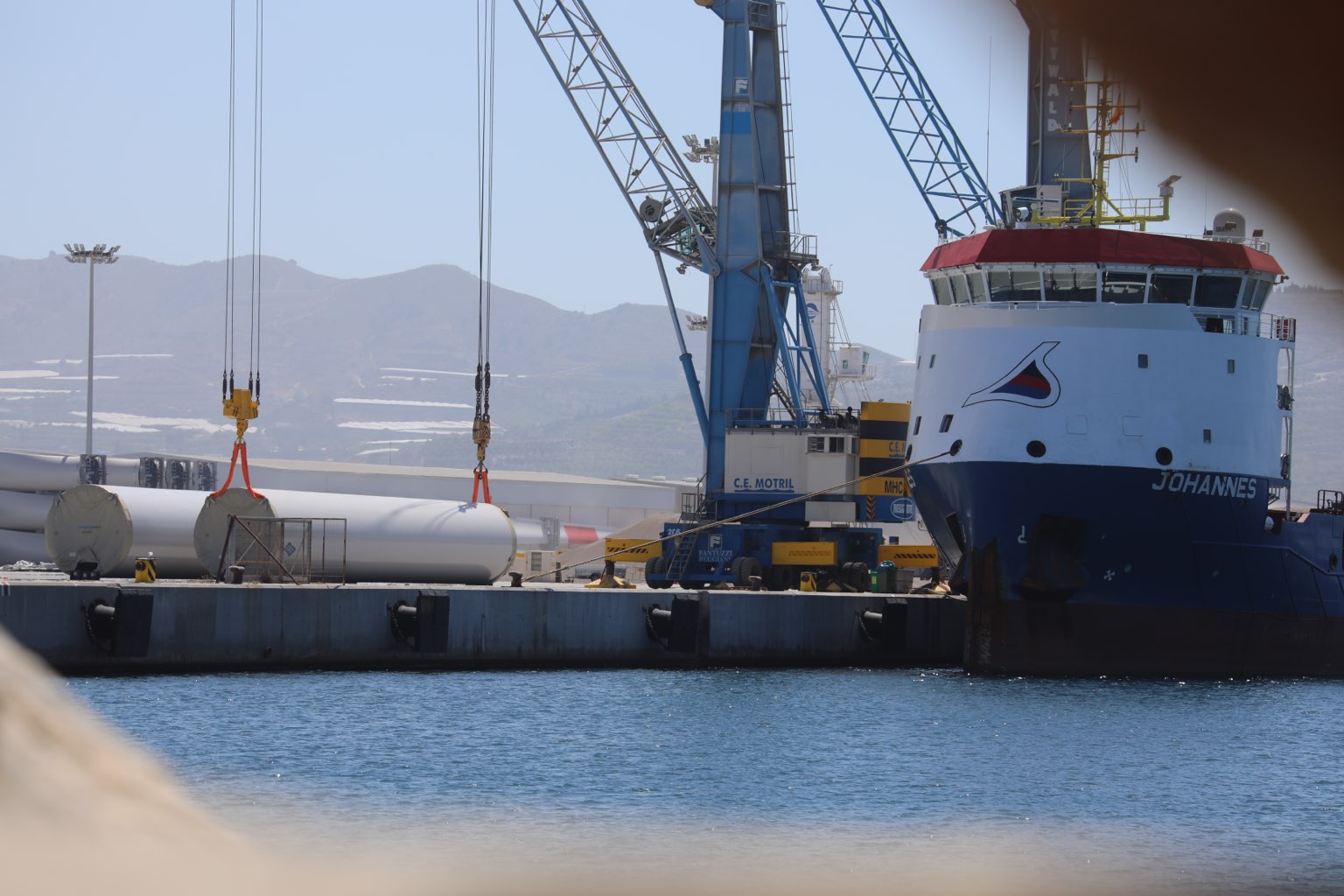 Today, Siemens Gamesa is loading large masts onboard a vessel in Motril, Spain, to be exported to occupied Western Sahara.

Photo: Siemens Gamesa masts being loaded in the port of Motril, southern Spain, in the afternoon of 6 July 2021. All videos and pictures in this article can be used free of charge, no credit needed.

In the afternoon of 6 July 2021, Siemens Gamesa Renewable Energy (SGRE) is loading windmill masts onto the cargo vessel Johannes in the port of Motril in the south of Spain. The masts are highly controversial, as they will be used for a new monstrously big wind farm in occupied Western Sahara.

Photos received by Western Sahara Resource Watch (WSRW) today show the logo of Siemens Gamesa Renewable Energy on the masts, as they are being lifted onto the vessel.

This is the second time in a week that SGRE undertakes such an export into the occupied territory. On 29 June 2021, the same cargo vessel arrived in the harbour of El Aaiun, with a similar cargo that it had taken in at the port of Motril. Eye-witness accounts from inside the port of El Aaiun testified having seen windmill parts being loaded off the Johannes on that same day.

Article continues under the video.

A sister vessel of the Johannes, the Aramis, is scheduled to arrive at Motril in the morning of 7 July 2021, most likely to pick up further cargo. WSRW expects the masts to originate from a Siemens Gamesa factory located in Linares, Jaen. Yet another vessel of the same fleet, the cargo ship Breb Countess arrived the port of Dakhla yesterday, on 5 July, having picked up its cargo in Turkey. Breb Countess lies so deep in the water that it cannot offload in El Aaiun. Dakhla has a deeper harbour basin.

The windmill parts are destined for a massive 300 MW wind farm in Boujdour - currently being developed by Italy's Enel Green Power and the Moroccan wind energy company Nareva, owned by the king of Morocco.

“Yes, the world is in need for renewable energy. But that does not give Siemens Gamesa the right to send such equipment into a territory that is held under brutal occupation. These wind parks contribute to cementing the Moroccan occupation of Western Sahara”, stated Sara Eyckmans of Western Sahara Resource Watch.

In September 2020, Siemens Gamesa announced it had received a massive new order covering the "supply, transport, installation, commissioning and testing of 87 units of the SG 3.4-132 wind turbine and a 5-year service agreement" for what the company refers to as "the Boujdour wind farm, located in the South of Morocco".

Boujdour is a town located along the mid-coast of the part of Western Sahara that has been under Morocco's military occupation since 1975. Since Siemens first engaged in the occupied territory, the Court of Justice of the EU has in four rulings concluded that Western Sahara and Morocco are 'separate and distinct' territories, and that trade deals with Morocco cannot apply to Western Sahara.

Both Enel and Siemens Gamesa were earlier this year excluded by Norway's biggest private asset manager for contributing to the violation of international law in the occupied territory.

Since 2015, the Court of Justice of the EU has repeatedly ruled that Morocco has no sovereignty over Western Sahara, nor any international mandate to administer it. The Research Services of the Bundestag qualified Western Sahara as an occupied territory and deemed Morocco's settlement policy in the territory as substantiating a violation of the Geneva Convention. As such, International Humanitarian Law applies there. It is this situation that Siemens Gamesa is contributing to maintain.

Literally every wind farm in occupied Western Sahara is equipped with wind mills from Siemens. In spite of ever more questions from shareholders, the German engineering company keeps dodging questions on the legality of its activities in the territory.

The Boujdour wind farm is part of Morocco's Integrated Wind Power Project, foreseeing in the installation of 850 MW of wind power across five parks. Three of those parks are in Morocco proper, while two are in occupied Western Sahara: in Boujdour and in Tiskrad, near El Aaiún. These two parks will deliver half of the Project's planned capacity. Originally, the Boujdour plant was conceptualised to have a capacity of 100 MW, while Tiskrad was put at 300 MW. It would appear that that has been turned around, as the Boujdour farm will have a total capacity of 300 MW. The Integrated Wind Power Project was tendered in 2012. In 2015, Morocco's national electricity agency ONEE announced that the bid went to the consortium of Enel Green Power, Nareva and Siemens Wind Power.

As part of the five-wind-farm deal, Siemens opened a wind turbine factory in Tangiers, in the north of Morocco. The factory was inaugurated in 2017. WSRW expects that the blades for the mills in Boujdour will be transported from this factory.

The vessels Johannes (IMO 9815343) and Aramis (IMO 9815329) are both carrying the Dutch flag, whereas  Breb Countess flies the Portuguese flag. All belong to the fleet of the German shipping company Briese. The same company was behind 9 documented shipments for Siemens Gamesa in 2012 and 2013 for the construction of the 50 MW Foum el Oued wind farm which today provides all the energy that Morocco's state owned phosphate company OCP requires for illegally running the phosphate industry in Western Sahara. WSRW wrote to the shipping company at the time, but did not receive a reply.